Relevance of the problem and aim and objective: Massive bone and soft tissue defects are seen after oncological maxillofacial operations. Surgeons and prosthodontists must cooperate and make a basic treatment plan. It is essential to improve the quality of life of the patient after completely removing the tumor, restoring masticatory function, and improving esthetic appearance. The study aims to collect and analyze the data of patients with orofacial malignant tumors during the period from 2010 to 2016 in the Hospital of Lithuanian University of Health Sciences (HLUHS) Department of Otorhinolaryngology and Department of Maxillofacial Surgery, National Cancer Institute (NCI) Department of Head and Neck Surgery, Klaipeda University Hospital and find out the availability and their need for rehabilitation and prosthetic treatment.

Results: The study involved 827 men and 699 women, the mean age was 68 years. Defects of the lower jaw were detected in 87 patients, of the ear—52 cases in the whole sample. 11.34% of patients required prosthetics to restore the defects after resection.

Conclusion: Among 1,526 analyzed cases, prosthetic treatment of the facial defects is required in 11.34% of patients.

Cancer is the most severe issue in our society. According to the data provided by The National Cancer Institute (NCI), the number of patients continues to grow. Orofacial cancer is one of the most commonly diagnosed oncological diseases in the facial and neck areas. It reaches around 263,000 cases every year worldwide.1 In Lithuania, a statistical overview of patients with facial oncological diseases has not been performed since 2000, when it was done by Doctor Tomas Linkevicius, together with the co-authors.2

Patients with oncological diseases regularly face many psychological and physical issues. The main problems after surgeries and radiation therapy in orofacial areas include long-lasting postoperative pain, disturbed chewing, swallowing, and lingual functions. Postoperative defects of massive bone and soft tissues cause significant facial esthetic infringements, which are essential for the latter patient adaptation in society.1,4,6 Due to the mentioned reasons, the tasks of oral and maxillofacial surgeons and dentists–orthopedists are to completely remove the tumor and attempt to recreate the impacted functions after the surgery and improving the patient esthetics as well as the quality of life.

Objective to perform an analysis of patients with orofacial malignant tumors during the period between 2010 and 2016 in the HLUHS Departments of Otorhinolaryngology and Maxillofacial Surgery, Klaipeda University Hospital, NCI Department of Head and Neck Surgery, and find out their need for rehabilitation and prosthetic treatment.

The research was performed at the HLUHS Departments of Otorhinolaryngology and Maxillofacial Surgery, Klaipeda University Hospital, NCI Department of Head and Neck Surgery, during the period from 2010 to 2016. After submitting all the required approvals, the authorization (No. BEC-LSMU(R)-34) was issued by The Centre of Bioethics at The Lithuanian University of Health Sciences.

Confidentiality of the subjects was ensured according to The Provisions of the Patient Rights and Health Compensation Act; the name, surname, address, and other personal details of the patients were not collected.

Medical records were analyzed according to these criteria: Years, department, gender, the area of impact, defect restoration, further treatment, and prosthetic treatment. The data were entered into a Microsoft Excel 2016 spreadsheet.

General Information about the Subjects

The study involved 827 men and 699 women. The age of the patients spanned from 12 to 98 years. The mean age of the participants was 68 years.

The majority of the patients who required orofacial prosthetic treatment were observed at the HLUHS (23.3%): The mandible defects were diagnosed to 64 patients, the floor of the mouth—55, tongue—36 cases in the sample. The general localization distribution is displayed in Figure 1.

The graph displayed in Figure 3 shows what treatment methods were chosen at the HLUHS with different localizations on the defects.

In most cases, at the HLUHS (75%) after the surgical operation, the defects were seen, reconstructive surgeries were applied to 6% of the cases.

The majority of the inpatients at the HLUHS (74.07%) have been recommended to come in for a consultation and control studies, 20% have been prescribed with radiation treatment, medicinal treatment was prescribed to 5.93% of the patients.

Fig. 1: Distribution of localization of lesions 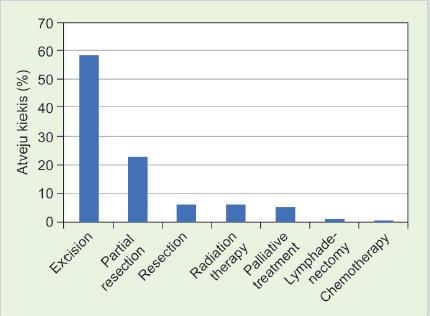 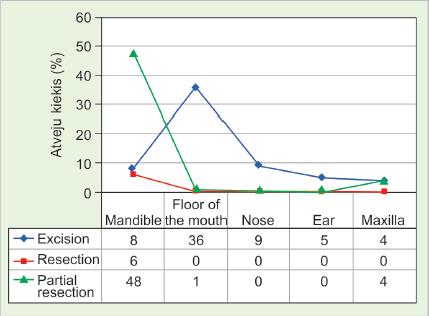 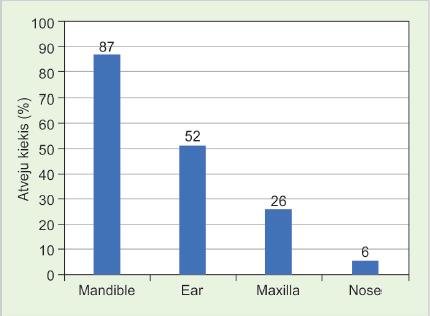 During the research, the medical records of the patients with orofacial malignant tumors from 2010 to 2016 were analyzed. After evaluating the results, we can observe the largest percentage of the patients who required orofacial prosthetic treatment was at the HLUHS (23.3%).

The mean age of the study participants (male and female) was 68 years. The same mean age was in the study by Farhangfar et al.8 In the study executed by Mercadante et al., the mean age was larger by 10 years;9 however, the results of all three studies show that oncological orofacial diseases are usually diagnosed for elder people.

After assessing the distribution of damage localization, it is clear that the most common diagnosis is for tumors in the lower jaw, the floor of the mouth, tongue, and parotid glands. The results of studies by Farhangfar et al. and Beck-Broichsitter et al. also show similar localization distribution and further supplement the results of our study—that oncological illnesses most commonly are displayed on the tongue, the parotid glands, and the floor of the mouth.7,8 The study by Farhangfar et al. states that 1.4% of the tumors were diagnosed in the nasal cavity and middle years, also similar distribution was noticed while analyzing the results of our research—nasal tumors were diagnosed for 2.7% of all patients, while ear—1.4%.8

11.34% of all the patients with orofacial malignant oncological diseases required prosthetic postoperative treatment to restore defects, of which 87% of cases analyzed in the research were to restore the lower jawbone. It is a significant percentage; thus, it is essential that even before the surgery, the further treatment plan is covered and the prosthetic treatment opportunities would be covered.10,11

One thousand five hundred and twenty-six cases were analyzed during the period from 2010 to 2016 in the HLUHS Departments of Otorhinolaryngology and Maxillofacial Surgery, Klaipeda University Hospital, and NCI Department of Head and Neck Surgery. Surgical treatment was performed for 87.3% cases of the Hospital of Lithuanian University of Health Sciences, for the remaining part of patients (12.6%) were given non-radical treatment methods. 11.34% with orofacial malignant tumors required prosthetic treatment to restore the defects.