Background/purpose: The most common developmental dental problem is that of agenesis. It is seen to affect around about 25% of the population. The aim of this study is to determine the prevalence of agenesis of third molars in patients visiting a dental college in the UAE.

Materials and methods: Orthopantomograms (OPGs) of 945 dental patients aged 6–30 years were evaluated for bilateral agenesis or congenitally missing teeth. Bilateral agenesis was considered and unilateral missing teeth were excluded from the study. Descriptive statistics were used to describe the percentages and frequencies were calculated using chi-square test and the level of significance was considered if the p value was %3C;0.05.

Conclusions: The prevalence rate of bilateral agenesis or congenitally missing permanent third molars is high at 31.76%.

Teeth which have not erupted at their usual times of eruption into the oral cavity are known by the term “agenesis.”1 It is one of the most common dental anomalies found in human beings. Whenever there is a complete absence of teeth, it is referred to as “anodontia.” When the number of missing teeth is six or more, then it is referred to as “oligodontia.”1,2 Hypodontia is a term used to refer to a condition when there are less than six teeth found missing.2

The tooth with the highest prevalence rate of agenesis is usually the third molar and is also referred to as “vestigial” at times.3,4

Ever since the evolution of human beings has occurred, there have been dramatic cultural and biological changes that have taken place in the human race, and these changes have also been reflected in the diet of human beings.3 The diet of humans is now more refined when compared to our ancestors, and this has also been suggested as a reason for decreasing dependency on the third molars and also reduced jaw size, resulting in an increasing prevalence of agenesis of third molars as evolution has happened.3,4

One of the characteristic features of third molars is the variability that it exhibits in its formation and odontogenesis and by its varying rates of being present or absent within the oral cavity.5 The different stages of odontogenesis of third molars inclusive of development, calcification, and eruption show a huge variation. At times, the development of the third molars can be initiated at the age of 5 years or maybe toward the early 7th year of life. The calcification of the third molars can begin as early as at the age of 7 years or can be delayed until the age of 16–17 years in some individuals.6 The etiology of agenesis could be attributed to environmental factors, genetic polymorphisms, systemic diseases, dietary habits, and masticatory function.7,8 The genetic etiology is usually attributed to the mutation of some genes (PAX9 and MSX1) in addition to some other etiological reasons in the prenatal and postnatal periods.9 Studies which compared the gender predilection suggested that the prevalence of agenesis was more in women than men.10 Racial comparisons revealed that there is a lesser rate of prevalence in the black race when compared to the whites and that Asians showed an increased prevalence of agenesis.10 There have been studies which have shown a prevalence of 12.7% in the British population.11 Another study among the Chilean population showed a prevalence rate of 24.75%12 and a high prevalence rate of 41% was seen in the Korean population.13 These variations can be attributed to factors like sample size, the population included, race investigated, and also not to forget genetic mutations which can result in agenesis as a result of evolution also.

Nine hundred forty-five OPGs at the oral radiology center of the university were used out of the total 18,500 OPGs available. These 945 OPGs were selected based upon the age-group, clarity of the OPG, presence of details in the OPG, and E-file of patients on the hospital information management system (HIMS). Patients with syndromes or other special needs patients as per the E-file records on HIMS were excluded from the study and also edentulous patients were not included. Also, patients who had periapical X-rays on their files which showed possible extraction of these (third molars, mandibular second premolars, and maxillary lateral incisors) teeth were excluded from the study. Once these 945 OPGs were selected, then a second level of inclusion and exclusion criteria in terms of evaluating for bilateral agenesis of the third molars was used to understand true agenesis.

Data observed in this study were described using descriptive statistical analysis. To evaluate the frequency of agenesis between sexes (males/females) and between the maxillary and mandibular arches where applicable Chi-square statistical test was applied, the level of significance was set at p <0.05.

The most common dental anomaly in humans is tooth agenesis and this agenesis is at times associated with other anomalies, structural malformations, delayed eruption, crowding, and juxtaposition.6 Agenesis of teeth can affect both primary and permanent dentition. These anomalies are genetic in origin and hereditary in nature most of the time.5 Nearly 25% of the population is affected by tooth agenesis.7 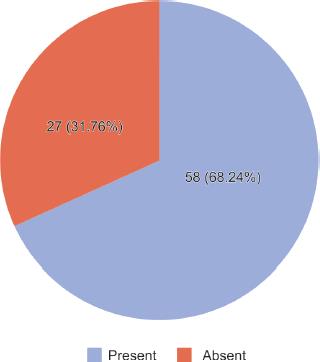 The present study was designed to determine the prevalence of bilateral agenesis or congenitally missing third molars among all nonsyndromic patients who had visited RAKCODS Clinics. In the present study, a tooth was diagnosed as congenitally missing or having agenesis when there was no mineralization of its crown on the OPG, and no evidence of its extraction on both the OPG and also on the patient’s E-file on HIMS.

In the present study, it was seen that the prevalence rate of bilateral agenesis or congenitally missing third molars is at 31.76%. The high prevalence of third molar agenesis seen in the present study can be due to the reduced number of OPGs which were included in the present study; however, yet the percentage remains high. There are studies which have reported high percentages, ranging from 24.75 to 41%.16 Genetics seems to play an important role in these high prevalence rates usually found in studies. Bone morphogenetic protein-4, produced early in dental epithelial development, regulates mesenchymal tooth-specific gene expression, including that of the MSX1 gene.17,18 A missense mutation in the MSX1 gene at chromosome 4p16.1 appears to be responsible for the third molar agenesis.18 The synergistic effects of both the genetic influence and the corresponding growth factors are possibly associated with agenesis of the third molars.17,18 Further, it has been suggested that third molar agenesis is also associated with decreased maxillary and mandibular jaw size as a result of continuous human evolution.18 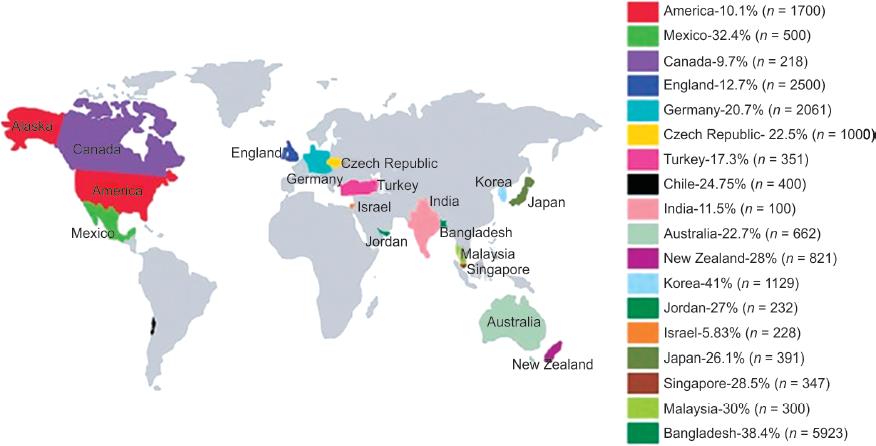 The prevalence of bilateral agenesis or congenitally missing teeth was seen more in males (55.55%) than females (44.44%) (Table 1). The results of the present study are similar to those of studies done in Iran, Australia, and Finland, which also showed higher incidence rates in males when compared to females.8.19,20 However, there are other studies which usually have shown increased incidence rates in females compared to males.10,21 It has been shown in studies that the prevalence of hypodontia is usually higher in females.10 Though there are not many plausible reasons that have been found in the literature regarding this finding of increased prevalence in either gender, there was a suggestion in one of the studies by Graber where it is suggested that genetics plays an important role in intersexual differences, though not much of an explanation was given.22

At the end of this study, the authors agreed that there should be more studies done to understand the influence genetics can have on the agenesis of teeth and what evolution of human beings means to the agenesis of the third molars. The authors believed that if there is more evolution of the human race, then there can be a time when the third molars may cease to exist.

In the present study, we found that

6. Hentisz AY. Radiographic study of third molar agenesis in a sample from the American Midsouth [Master’s thesis]. University of Tennessee; 2003.