Aim: Anterior open bite has a multifactorial etiology and high tendency to relapse. Thus, treatment of this malocclusion is challenging. Tooth extraction has been proposed by some researchers for correction of skeletal anterior open bite. This study aimed to assess cephalometric changes of vertical facial height in patients with skeletal open bite following extraction of mandibular second premolars.

Conclusion: Open bite closure in patients was mainly due to relative extrusion and retrusion of anterior teeth in both jaws. The results at the 24-month follow-up showed stability of treatment, although longer follow-ups are required to reach a definite judgment.

Clinical significance: This treatment can help long-face patients who are not candidate of orthognathic surgery because of complicated systemic conditions or those patients who do not want to have any surgery.

Open bite is among the most common dental anomalies. Anterior open bite is defined as absence of contact between the maxillary and mandibular anterior teeth while other teeth are in occlusion.1 This anomaly is more common in the primary dentition period; however, it may continue to adulthood. Treatment of open bite, especially in the permanent dentition period, is highly challenging for orthodontists.2

The prevalence of anterior open bite ranges from 1.5 to 11% in different age groups.1 Open bite is a multifactorial condition and finding its etiology plays an important role in its diagnosis and treatment. Researchers have mentioned several causes for this anomaly. Some have reported genetics as well as environmental and behavioral factors to be responsible for development of open bite.3 Many researchers believe that nonnutritive sucking habits are the main causes of anterior open bite.4 The following factors are the main local or environmental parameters responsible for the development of open bite at a young age:

Correction of open bite is a complex procedure due to high risk of relapse (25–38%),7 particularly in adults since the skeletal growth and development of the jaws has terminated.8 In some cases, prevention of overgrowth of the maxilla and its rotation in the posterior area or prevention of overeruption of posterior teeth during the growth spurt fails due to the remaining growth.7

Therapeutic interventions for treatment of anterior open bite also vary depending on the dentition stage. Therapeutic strategies are divided into three categories of treatment in the primary dentition period, the mixed dentition period, and the permanent dentition period. Simple orthodontic treatments are not effective in the permanent dentition period. Two treatment strategies are available for treatment of open bite in this period. In very severe cases, orthodontic treatment is not sufficient alone and the patient must undergo a surgical procedure as well. Maxillary surgeries are often performed to achieve adequate facial height in long-face patients, while mandibular surgeries are performed to correct the anterior–posterior dimension of the face.2

Selection of a suitable treatment modality is eventually done by taking into account the dental, skeletal, and functional factors.3

The inclusion and exclusion criteria were as follows:

After completion of leveling and alignment of teeth in both jaws, intermaxillary elastics were used for final correction of class II relationship (if they had class II relationship) and anterior open bite closure in patients. After completion of the active phase of treatment, Hawley retainers were used in both jaws. The patients were requested to use these retainers full time in the first 3 months following completion of treatment. In case of no relapse in position of teeth in both jaws, the duration of usage of these retainers decreased for the next months. Also, during the course of treatment and after that, proper positioning of the tongue was instructed to patients.

During the course of treatment, the space gained by extraction of mandibular second premolars was used for mesial movement of molars (C-anchorage). Also, the anchorage in the maxilla was B-anchorage. During treatment, we tried our best to prevent extrusion of first molars. Since mesial movement of the molar tooth could result in its mesial rotation, an anti-rotation bend (toe-in) was made in orthodontic wires.

Cephalometric analyses and comparison of cephalograms after treatment with baseline cephalograms of patients revealed the following:

Cephalograms of patients taken at 24 months’ posttreatment (T3) were compared with those taken immediately after completion of treatment (T2) and showed no significant change in any parameter. With regard to overbite, six patients experienced a reduction and two patients experienced an increase in overbite; overbite remained unchanged in five patients. However, reduction in overbite in the mentioned six patients did not result in bite opening and all patients still had positive overbite.

Insignificant changes in cephalometric analysis of some variables such as SNA noted immediately after treatment and after 24 months (T3) were normal because cephalograms of patients had been taken by different X-ray units and at different times. Thus, insignificant changes at the two time points were inevitable and were considered normal.

Table 2 compares the mean and standard deviation of parameters measured on cephalograms of patients at baseline, immediately after treatment and at 24 months’ posttreatment. Also, Figures 1 to 3 show SN-MP, LAFH, and overbite at T1, T2, and T3. 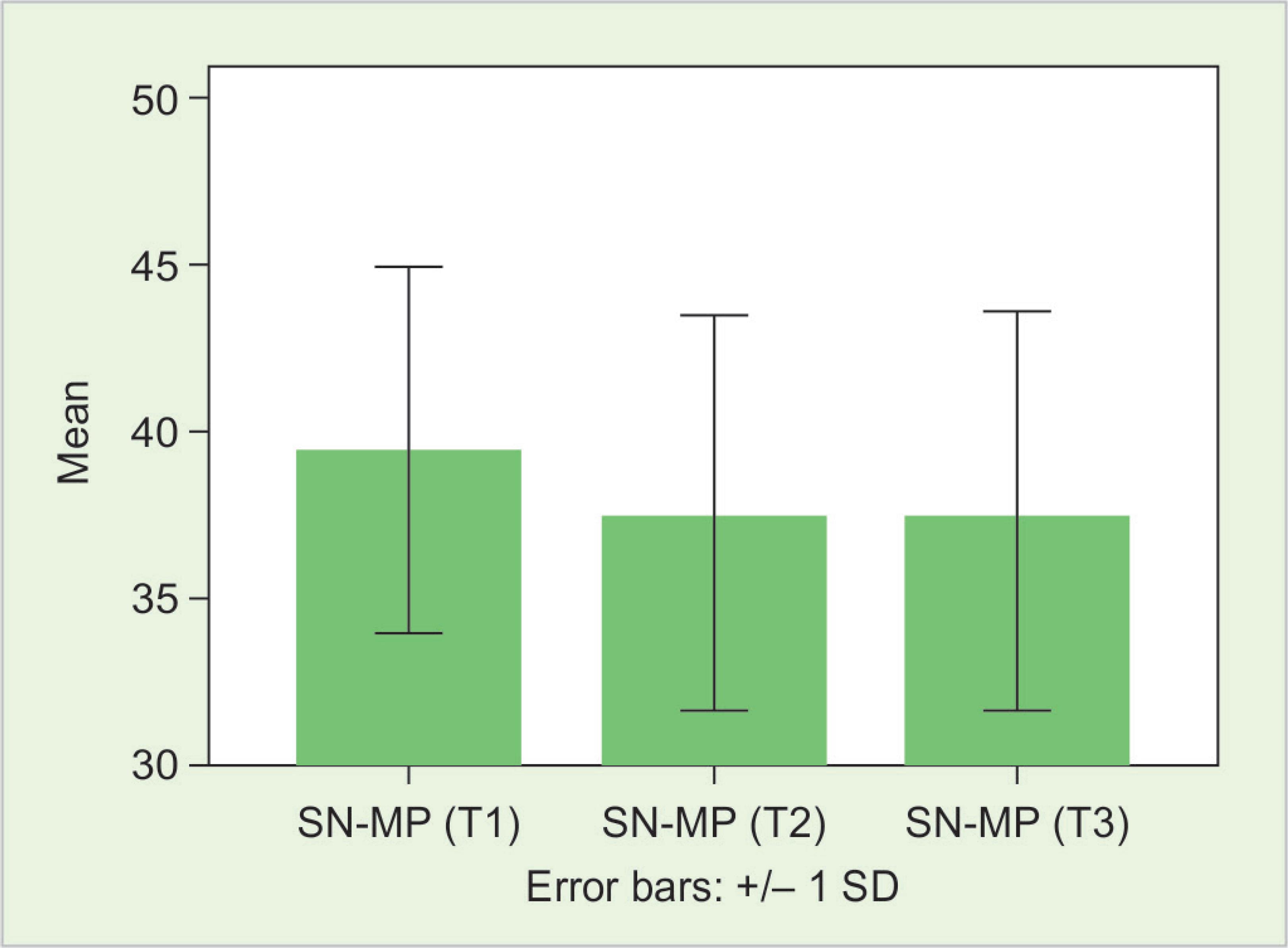 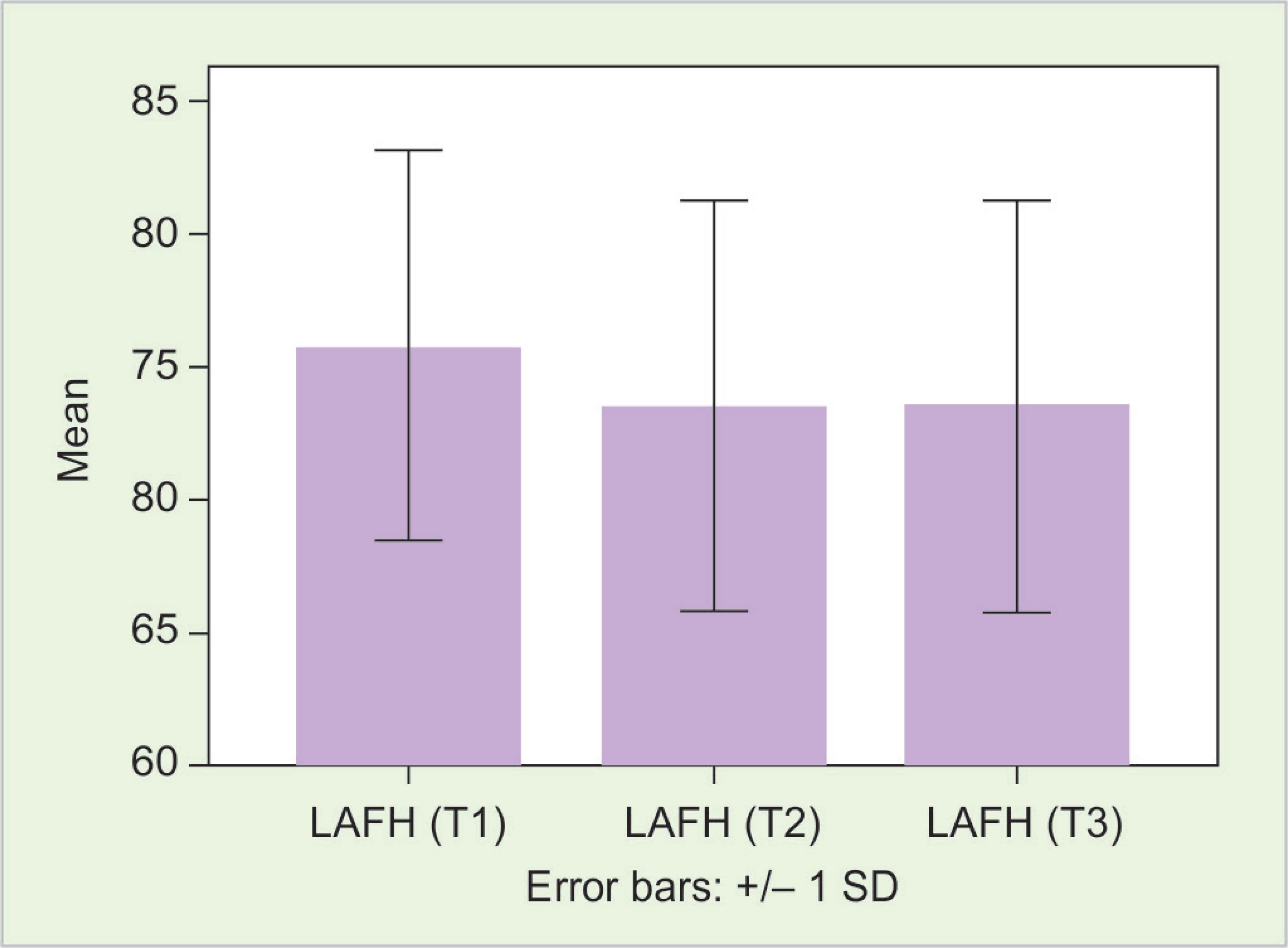 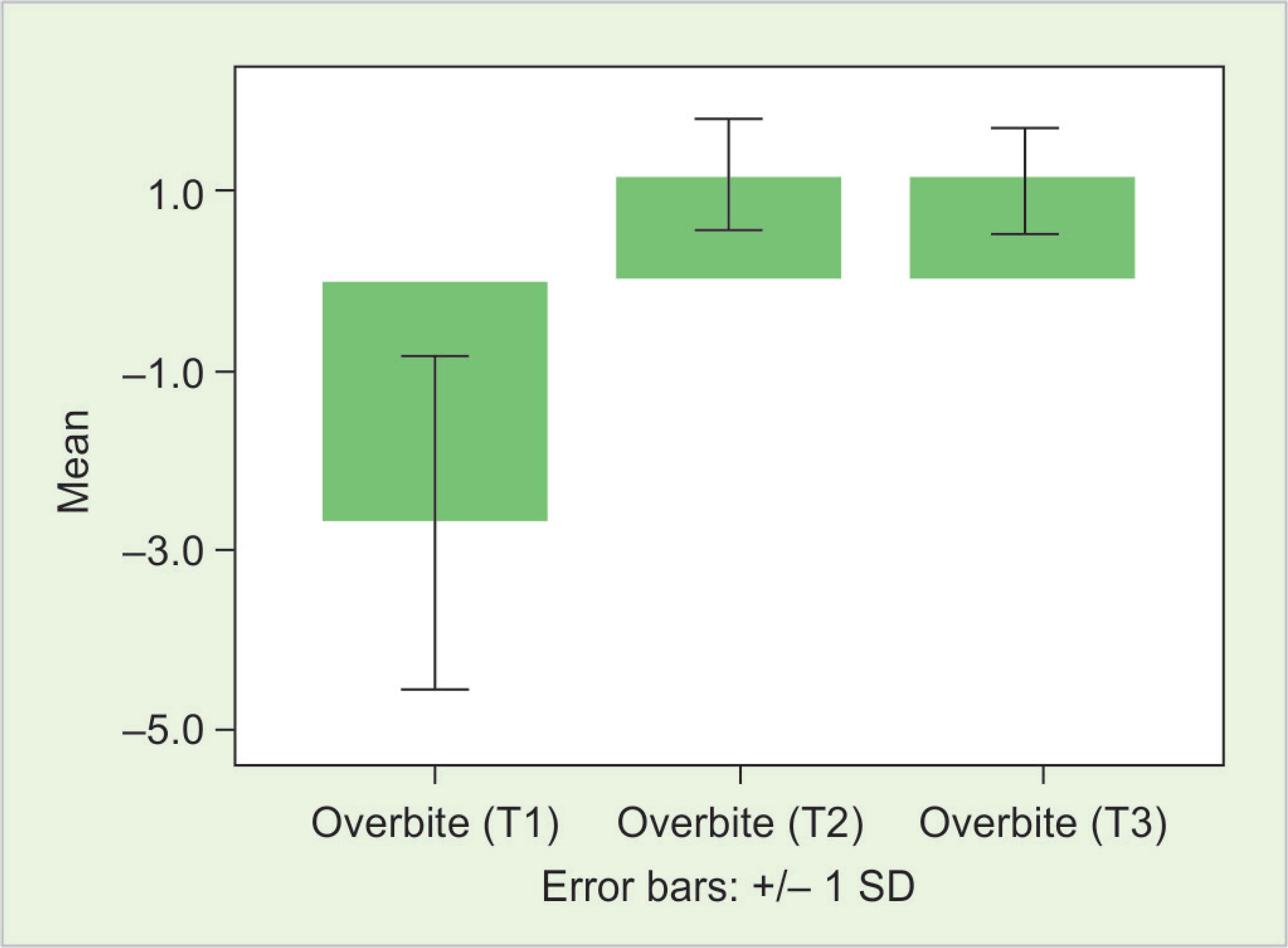 Statistical analysis of the data of patients at 24 months after treatment showed that none of the parameters evaluated in this study experienced any significant change compared to their value immediately after completion of treatment.

In contrast, other researchers have discussed that extraction of second premolars and first molars would result in rotation of the mandible for the sake of open bite closure in skeletal open bite patients; however, extraction of first premolars does not cause significant changes in mandibular rotation.12 Some others have mentioned that extraction of second premolars creates a wedge effect and results in greater mesial movement of the first molar compared to patients in whom first premolars are extracted, and can result in open bite closure and reduction in vertical facial height.12,13

In the current study, extraction of mandibular second premolars changed the cephalometric parameters such that the sum of posterior angles and SN-MP angle slightly decreased and the Jarabak index slightly increased. All these changes were statistically significant but not clinically perceivable. Also, the angle of maxillary and mandibular incisors relative to the palatal and mandibular planes significantly decreased. Significant increase in overbite was noted in all patients. Based on the results, it may be stated that despite reduction in facial height, open bite closure was mainly due to the retroclination of the maxillary and mandibular incisors. Thus, our study, similar to that of Kim et al.,12 showed that extraction of mandibular second premolars and mesial movement of molars had no significant effect on open bite closure. Another important issue with regard to treatment of open bite is the stability of treatment in long term. Open bite treatment at a young age and the mixed dentition period would yield the best results with minimal rate of relapse. However, opinions on the outcome of treatment of open bite in adults are controversial.

This study was approved by the Ethical Committee of our university (ethical approval code: IR.SBMU.RIDS.REC.1394.99).