Aim: The aim of this study was to compare the clinical and radiographic successes for pulpotomy using formocresol (FC), and diode laser (DL) in primary molars.

Materials and methods: Children within the age group of 4–8 years, with a total of 40 teeth, were selected for the study. They were divided into two groups of 20 each in FC and DL, and were restored with prefabricated crowns. Clinical and radiographic evaluations were done at 1, 3, 6, and 9 months using modified Zurn and Seale criteria. Data were statistically analyzed.

Results: On comparison of clinical and radiographic scores of all two groups at 1, 3, 6, and 9 months interval, Chi-square value and p value were found to be insignificant.

Conclusion: Although the radiographic difference between the two groups is not statistically significant, clinically DL offers higher success rate as compared to others. Further studies need to be carried out with larger sample and a longer follow-up period.

It is important to preserve the primary dentition until permanent successors erupt in the oral cavity.1 Pulpotomy follows the concept in which the radicular pulp tissue is stable or able to recover following surgical amputation of the damaged or contaminated coronal pulp.2 It is defined as “a clinical procedure to remove the infected coronal pulpal tissue in order to preserve the vitality and function of the radicular pulp.”3 It can be difficult and often impossible to clean, give shape to, and properly obturate the root canals in procedure like pulpectomy. Moreover, cooperation from the child and behavior management can be difficult for the dentist attempting to provide extensive restorative treatment. Pulpotomy seems to be a reasonable treatment option to meet these situations.4 Asymptomatic deciduous teeth with large carious lesions approximating the pulp and thus at risk of exposure to the pulp are often treated with pulpotomy. Ideal requirements of a pulpotomy agent are healing and preservation of vitality of the radicular pulp tissue. Variety of medicaments is used to perform pulpotomies, including diluted formocresol (FC), electrosurgery, ferric sulfate, lasers, sodium hypochlorite, mineral trioxide aggregate (MTA), and a variety of phytochemicals to name a few.5,6

In this study, pulpotomy was performed using FC and diode laser (DL), which was clinically and X-ray evaluation at 1, 3, 6, and 9 months to explore an archetypal pulpotomy procedure.

Ethical approval from the Ethical Committee was received, and children within the age group of 4–8 years, who attended the Department of Pedodontics and Preventive Dentistry, with a total of 40 teeth, were selected of which 20 teeth were considered for each material group.

We planned a study of cases and controls which will be divided into two groups.

The treatment plan was discussed and explained to the parent of the child and prior to clinical procedure, and written consent was obtained for treatment. Topical anesthesia using Precaine gel (Pascal Int., WA, USA) was applied to the area of needle insertion using a cotton applicator tip followed by 2% lidocaine injection. Rubber dam isolation was performed and the tooth was prepared for receiving the stainless steel crown and appropriate crown was selected. Before pulpal exposure, dental caries was excavated with a large slow-speed round bur. If a carious pulpal exposure was evident, the roof of the pulp chamber was removed using a no. 330 carbide bur or a high-speed nonend cutting bur under copious water spray. A sterile spoon excavator was used to amputate all the coronal pulp. The pulp chamber was thoroughly washed with saline to remove all debris and pulp filaments to ensure sanitation of the amputation site. Hemorrhage was controlled with slightly moistened cotton pellets (wetted and blotted almost dry) placed against the radicular pulp stumps. Dry cotton pellets were placed over the moist pellets and light pressure was exerted on it. Once the bleeding was controlled, the tooth was managed using FC and laser pulpotomy techniques depending on the group to which the tooth belonged.

The present study tried to find whether there is any difference in the success rates in two groups at different time intervals. Here there is coded data or graded data (1–4) where the rate of failure increased with the grade. This is called ordinal data. Hence, the difference was assessed using nonparametric equivalence of ANOVA, namely Kruskal–Wallis ANOVA test. It was found that there is no statistically significant difference in both the groups at 1 month (p = 0.77), 3 months (p = 0.42), 6 months (p = 0.58) and 9 months (p = 0.69) (Figs 1 and 2).

The present study examined the clinical and radiographic success rates of FC and DL pulpotomies to assess the relative efficacy of the two different techniques. Despite the reported toxic, mutagenic, and carcinogenic properties, due to its high clinical success rate, FC is still used in primary teeth pulp therapy.8

The rationale behind the 1-minute modified FC pulpotomy technique is to conclude that the length of exposure to the drug is critical in determining the pulpal response to FC. Histologic studies have shown that the 1-minute application produces least inflammatory response with favorable clinical and radiographic outcomes.9 One-minute modified FC pulpotomy technique gave a 100% clinical success rate and a 90.91% radiograph success rate in a study,10 which was comparable to the clinical and radiographic success rates reported by Kurji.11 Durmus and Tanboga,12 where the radiographic success rates of the FC group was 87% and ferric sulfate group was 79% when compared to DL group where it showed 75% with no significant difference. FC pulpotomies had a success rate of 100% at 1 year and about 91% at 2 years. The 6-month clinical and radiographic evaluations revealed total success rates of 100% in the MTA, ferric sulfate (FS), and FC groups and 96% in the zinc oxide eugenol (ZOE) group.13 In present study in FC group, clinical success was not significant when compared with other groups (p = 0.67). Radiographic success was seen at 1, 3, 6, and 9 months follow-up which was statistically insignificant when compared with other two groups with a p value of 0.76, 0.57, 0.64, and 0.59, respectively.

Lasers, including the laser diode, have found wide application of soft tissue procedures in general and oral surgery.14,15 Lasers have been commonly used, including pulpotomy, in dental procedures.16 Due to their reliability and handiness, DLs were used more frequently in pulpotomy. Use of laser for pulpotomy procedure has more superiority such as control of hemorrhage, sterilization of the lesion, and stimulation of dental pulp cells causing dentinogenesis, preservation of tooth vitality, and increased healing. Therefore, it was suggested as an alternative for primary teeth pulpotomy. Diode laser potentially has benefited by the following: minimum or no bleeding, faster cure, reduced postoperative infection, and low or no anesthesia. In a very small package, the DL uses almost microscopic chips of gallium arsenide or other useful semiconductors to produce coherent light. The differences within energy level in these semiconductors between the conductive and valence band electrons provide the basis for laser action. The overall efficiency is much higher and is therefore more practical.17 This emits an infrared light beam in which the transfer of laser energy to heat contributes to a well-located ablation of soft tissue. This reaction is most often followed by thermal peripheral damage to the tissue and tissue loading at the site of the impact.18,19 Due to the high absorption of the wavelength (980 nm) at which energy is produced in tissues such as dental pulp, which have a very high water content, the DL is more convenient for the pulpotomy technique. In contact mode, only the soft tissues with the laser-emitting tip are affected in immediate contact (micrometer range), leaving the remaining tissue unaffected. Early histopathological analyses of different DLs showed decreased pulpal tissue thermal damage and improved pulpal wound healing.20,21 Based on these characteristics, the DL appears to be promising as an alternative for pulpotomy therapy.22 Saltzman et al.22 compared pulpotomy of DL-MTA together with standard FC-ZOE pulpotomy. The FC-ZOE pulpotomy received an 87.5% radiographic success rate, while the DL-MTA pulpotomy decreased this rate to 70.8%. Nevertheless, the 15-month radiographic examination did not reveal any significant difference between the two types of treatment. Similar results for DL pulpotomy with ZOE dressing have been identified in our study. The successful results of laser diode pulpotomy vary across the literature, depending on the spectrum of laser settings and usage modes. If pulp tissue is treated with laser irradiation, a surface area of coagulation necrosis is produced that is consistent with the underlying tissue and isolates the pulp from the sub-base’s harmful effects. Variation in laser application parameters, including power, frequency, exposure time, and dry water/air mode, results in different pulp tissue results. Such findings in case of laser-assisted pulpotomy may be responsible for the factor results.12 In general, however, DL findings are at least as good as those of other therapies such as ferric sulfate, NaOCl, MTA, biodentin,23,24 or even better.25 Golpayegani et al.26 evaluated results of laser irradiation with 632 nm diode followed by filling with ZOE. A clinical success rate of 100% was observed in 18 primary molars after 1 year. Radiographic success rates for the test group were significantly lower by 80% compared to 93% in the control group.

In the present study, 810 nm DL was directed onto the pulp stump at 1.5 W in a continuous mode for 10 seconds in contact mode until the tissue was seen to be ablated. Multiple spectrums of laser configuration and modes are used in the DL pulpotomy. Similar modes of DL were used (970 nm, 3 W) in a study by Kuo et al.27 and (980 nm, 3 W) in the study by Gupta et al.,28 and both trials have a clinical success rate of 100%. The two studies’ radiographic success rates were 97.6% and 100%, respectively, for 1-year follow-up and 90.9% for 2-year follow-up by Kuo et al.26 Laser induces an immediate and reversible decrease in blood flow in the microcirculation of the pulp for 3–6 minutes without any hyperemic reaction. This laser-induced hemorrhage can mask the true hyperemia in the radicular pulp, which can be mentioned as one of the disadvantages with laser.22 In present study, DL group showed no radiographic changes in the first month. The clinical and radiographic successes at 1, 3, 6, and 9 months were statistically insignificant when compared with other two groups with a p value of 0.76, 0.57, 0.64, and 0.59 for 1, 3, 6, and 9 months, respectively.

In both groups, reinforced ZOE was used as the pulpotomy base material. The addition of polymethyl methacrylate in reinforced ZOE may decrease the effects of eugenol, which is thought to be an irritant to pulp tissue. In a retrospective study, Hui-Derksen et al. evaluated pulpotomies upon placement and subsequent restoration of the reinforced ZOE sub-base in the pulp chamber. They obtained a clinical radiographic success rate of approximately 95%, 97%, and 94%, respectively.29,20 Based on the aforesaid study, we used reinforced ZOE as the base material for pulpotomy in DL and FC groups.

It is an investigated fact that coronal dentin, deprived as in cervical pulpotomies of its odontoblastic processes, becomes fragile and prone to cracks or fractures. Full coverage prevents these cracks and restores them without leakage.31 The healing of the dental pulp does not rely solely on the supposed stimulating effect of a specific type of medication but is directly linked to the ability of both the dressing and the definitive restorative substance to provide a biological seal against immediate and long-term microleakage throughout the restoration interface.32 Stainless steel crown provides optimal coronal seal and restores tooth anatomy and function.30 After the pulpotomy procedure, stainless steel crown was immediately placed. 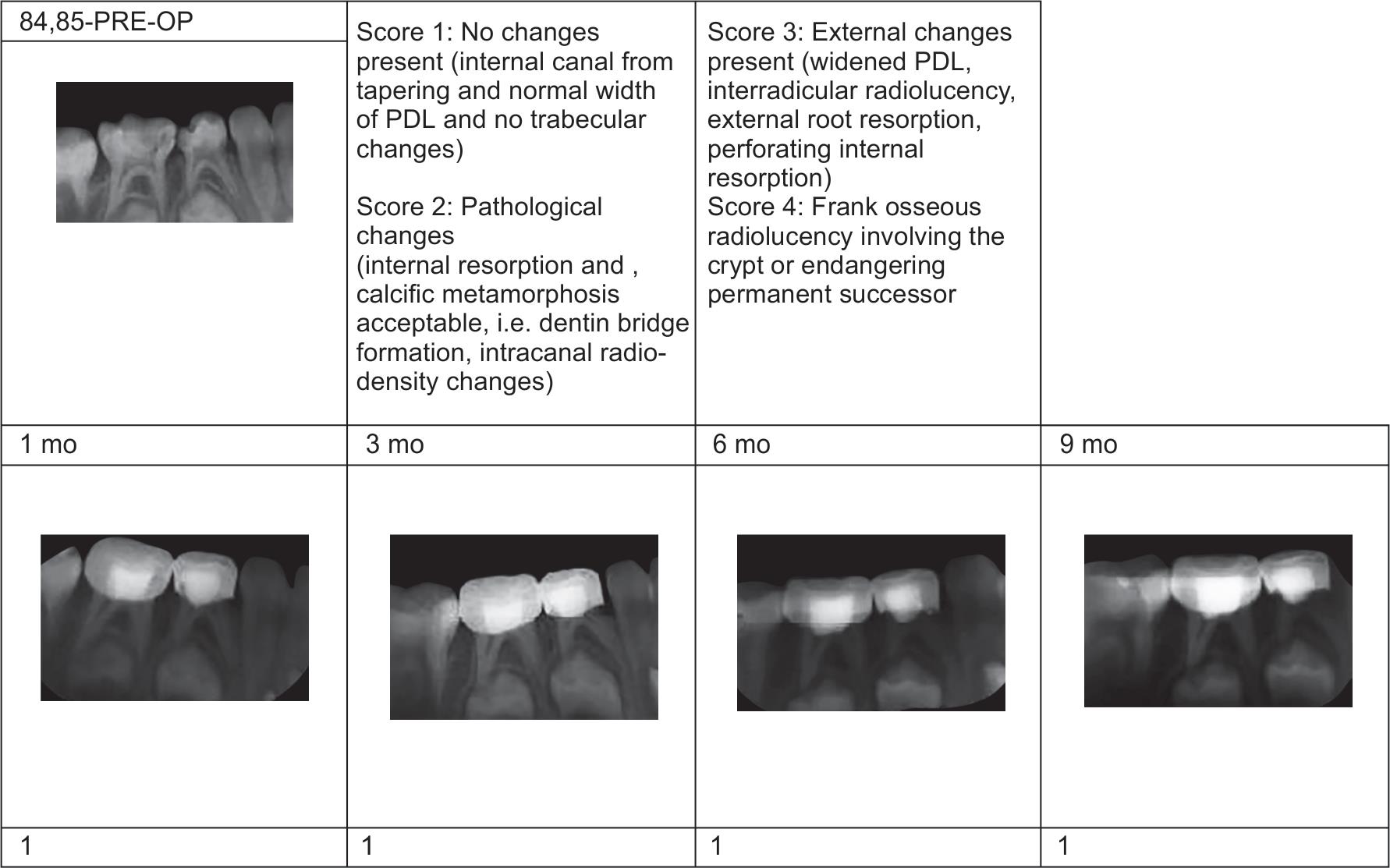 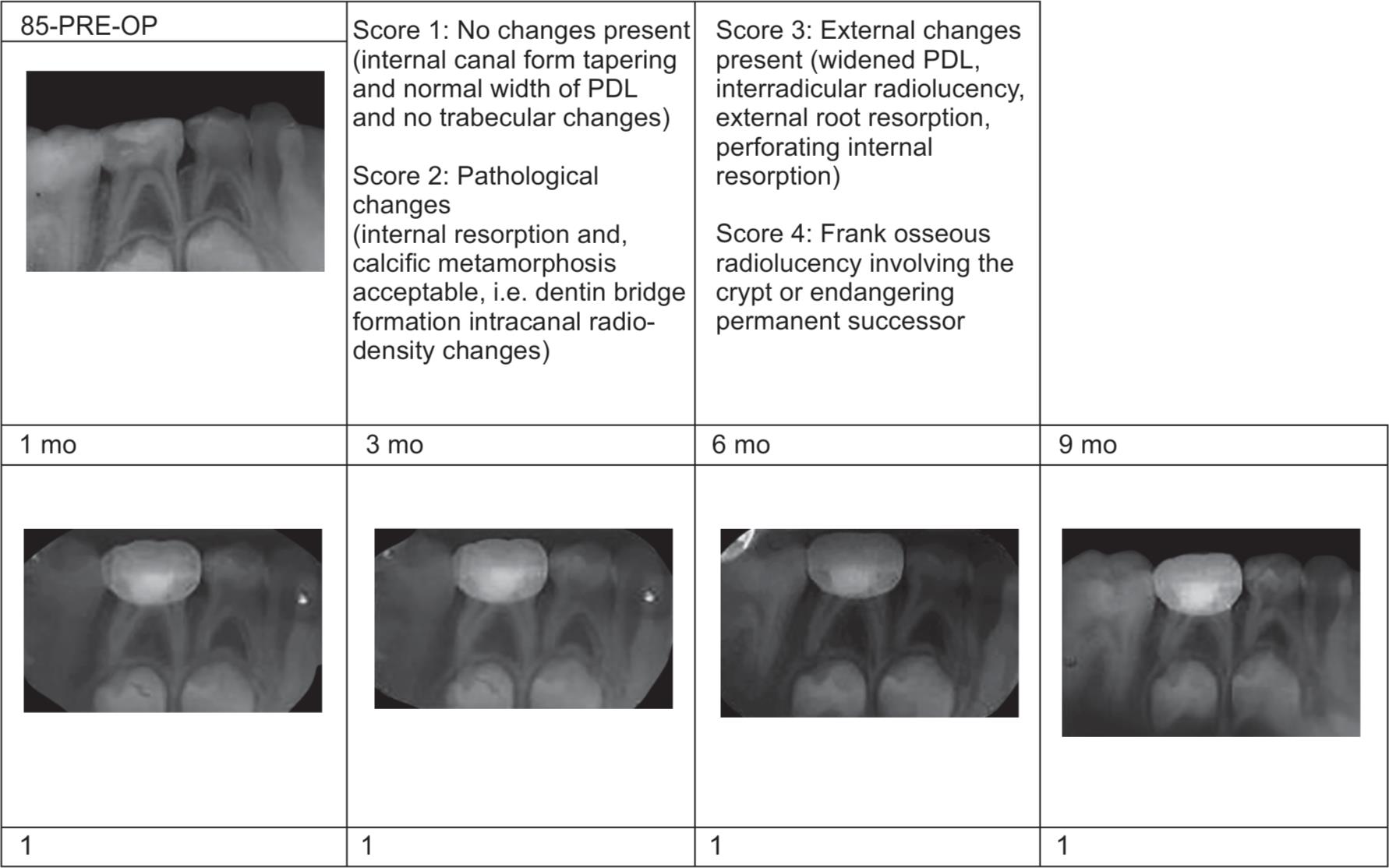