Materials and methods: This study comprised of taking cephalometric radiographs of 82 subjects (42 male, 40 female) with a mean age of 21.9 ± 2.8 years. The sample was divided into three groups: short-face group: FMA %3C;25°; average-face group: FMA ≥25° to <30°, and long-face group: FMA ≥30°. Eight angular and seven linear measurements were taken and compared between the groups.

Much attention has been paid to the position of upper and lower anterior teeth in relation to their supporting bone; it is one of the essential factors in the planning of orthodontic treatment and the determination of its results.1–3 It has been reported that if the root apex of the incisor is moved against the alveolar bone’s cortical plate, damaging effects such as root resorption and bone loss may occur.2 It is widely accepted that there is an association between vertical facial morphology and the cant of the mandible. As a result, the correlation between anterior dentoalveolar dimensions and various skeletal jaw relationships has become a subject of interest for many researchers.4–6 It has been reported that in deep and open bite cases, a relationship between anterior dentoalveolar maxillary and mandibular structures and lower face height may exist.7 Some researchers have reported significant differences between patients with normal bites and those with deep bites with regard to the anterior dentoalveolar height,8 while others have noted a smaller dentoalveolar height.9–11 Beckmann et al.,7 stated that long-faced patients often have narrow and lengthened maxillary and mandibular projections in the midsagittal plane. This suggests the existence of a compensatory reaction that increases the vertical extents simultaneously, while also decreasing the labiolingual size of the alveolar bone in the front part of the two jaws.

This study was designed to determine the mean anterior dentoalveolar dimensions of Yemenis, identifying any possible sex differences, and comparing the anterior maxillary and mandibular dentoalveolar sizes across short, average, and long facial groups.

The present research was endorsed by the College of Dentistry’s Ethical Committee, Taibah University. The material of this study comprised of cephalometric radiographs of 82 subjects (42 male, 40 female) with a mean age of 21.9 ± 2.8 years. These were recruited by university students at Ibb University, as well as from the author’s private dental clinic in Ibb city, Yemen. The sampling technique used was accidental sampling. The selection criteria were as follows: Yemeni citizen; class I malocclusion; no previous or ongoing orthodontic treatment; no prosthodontic treatments; no craniofacial anomalies, and all cephalometric radiographs were of good quality.

The recruited sample was divided into three different groups based on the Frankfort-mandibular plane angle (FMA):

On the lateral cephalograms, 7 linear and 4 angular measurements were traced and measured (Figs 1 and 2). This task was undertaken manually by the same investigator.

To evaluate the method’s error, 30 cephalograms were randomly selected and measured twice, the second measurement being taken after 1-month interval. The results were compared using a paired t test. No significant variations were discovered. 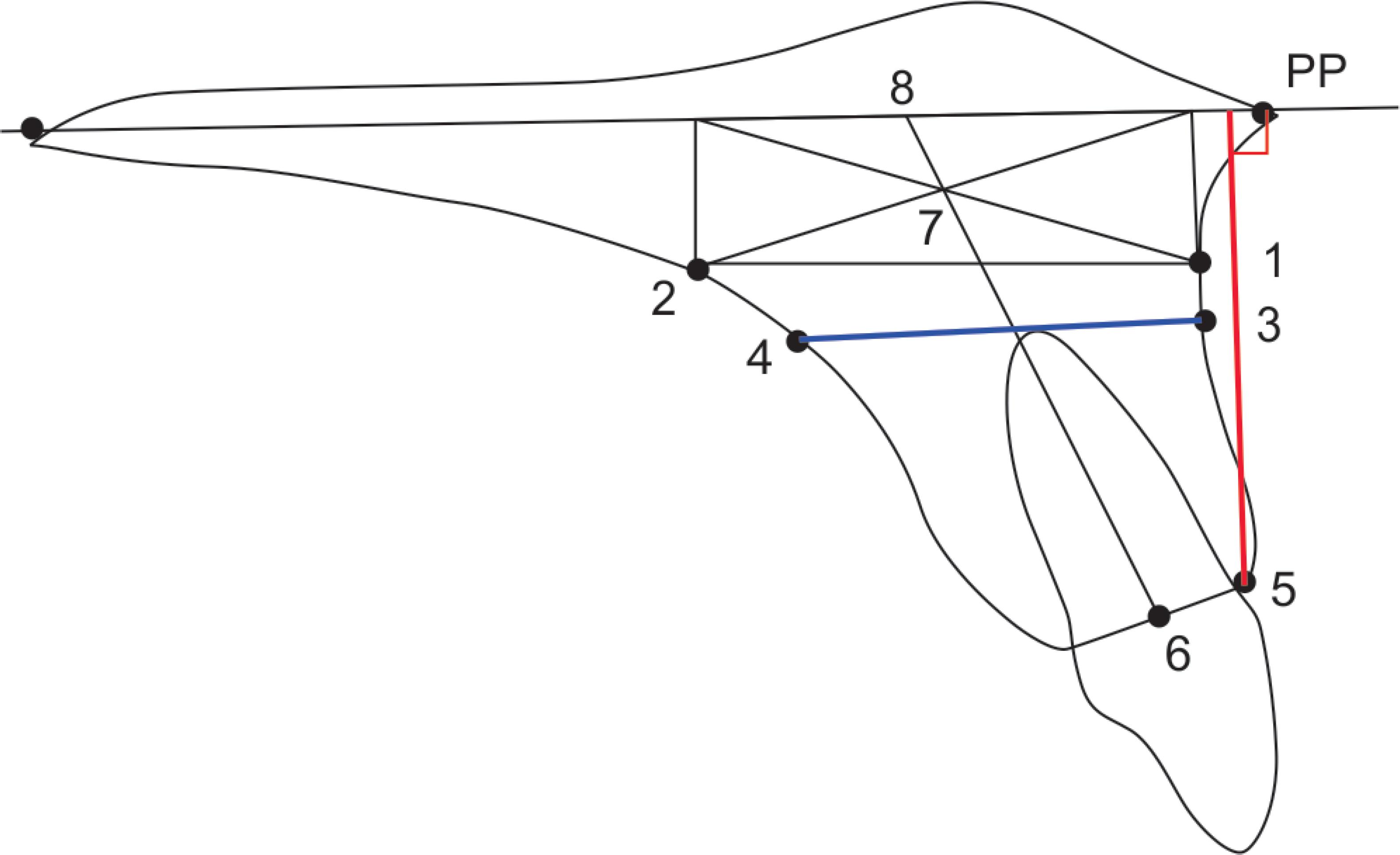 Fig. 1: Maxillary measurements. Cephalometric landmarks: (1) Point A (subspinale); (2) Corresponding point of A point (same distance from palatal plane as point A); (3 and 4) Anterior and posterior point of a line parallel to the palatal plane and passing through the apex of upper incisor; (5) Prosthion (Pr); (6) Center of the alveolar meatus of the upper central incisor; (7) Center of rectangular bordered by a line connecting point (1) and point (2) and palatal plane; (8) A constructed point at the intersection between a line connecting point (6) and (7) and palatal plane. Measurements: maxillary anterior width (MxAW): measured from point (3) to (4). Maxillary anterior height (MxAH): the distance along a perpendicular line from point (5) to palatal plane maxillary anterior length (MxAL): measured from point (6) to (8) passing through point (7)

The mean and standard deviation for the total sample was determined, and comparisons between the male and female groups were conducted using a t test. Comparison between the short, average and long-face groups was carried out using an analysis of variance (ANOVA), followed by a Bonferroni test. Pearson’s correlation coefficient was used to determine the relationship between vertical and sagittal cephalometric measurements and the anterior dentoalveolar dimensions for short, average and long-face groups. SPSS analysis software (version 20, SPSS, IBM Corporation, USA) was used to conduct statistical analyses. Our significance level was set at p <0.05.

Table 1 exhibits the average age, mean and standard deviations of the cephalometric characteristics of the total sample, as well as for the male and female groups.

Table 2 presents the mean and standard deviations of the sagittal and vertical relations, dentoalveolar dimensions and comparisons between the three groups. There were no significant variations between the groups, with the exception of the short-face group demonstrating shorter maxillary anterior length (MxAL), and shorter maxillary anterior height (MxAH) than the average-face group (p < 0.05). 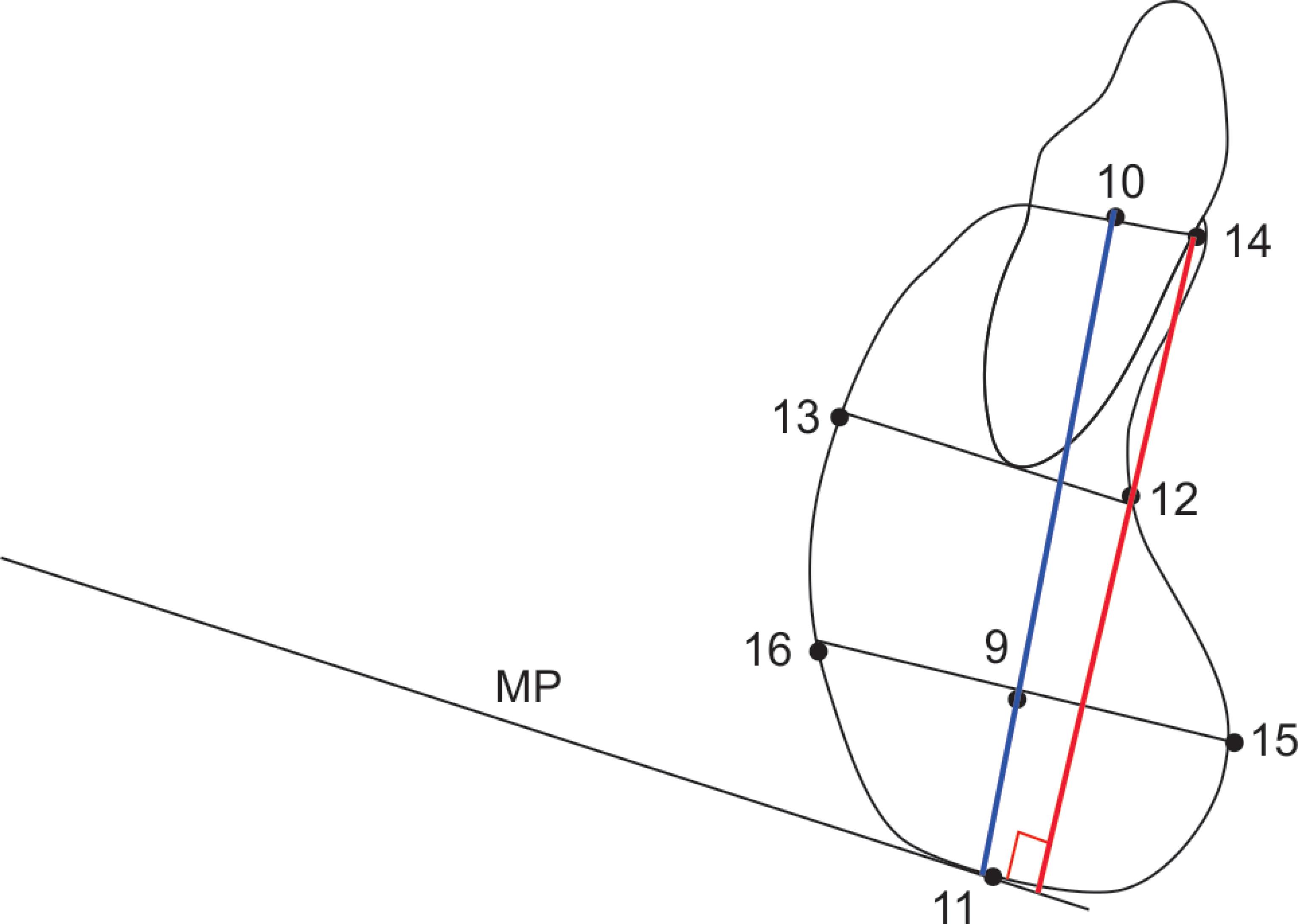 Although there were no variations in the maxillary measurements between males and females, significant differences, particularly in the mandibular measurements, were found. Male subjects exhibited considerably greater MdAL, greater MdAH, and broader SD than females (p < 0.05). A similar finding was reported by Mangla et al.,12 who evaluated the mandibular morphology across different facial types. They discovered that males showed greater symphysis height and depth than females. In his study on Saudi subjects, AlHadlaq13 stated that the anteroposterior and vertical dimensions of the anterior alveolus might be affected by both sex and the sagittal relationship. Comparison between the groups revealed that the short-face group had a shorter MxAL than the average- and long-face groups. However, a Bonferroni analysis only showed a significant difference between the short and average-face groups (p < 0.05). This finding differs from that reported by Vitchuyanon,14 who failed to identify any significant difference between groups regarding the maxillary anterior dentoalveolar length. Additionally, the short-face group displayed shorter MxAH than the average- and long-face groups (p < 0.05). However, the post hoc analysis only revealed a significant difference between the short and average-face groups. This is similar to results reported by Al-Zubaidi and Obaidi.15 Vitchuyanon14 found that the maxillary anterior dentoalveolar height was greater in the open bite group and shorter in the deep bite group. The present finding is partially in agreement with this report regarding the second part of the result. Other studies8,16,17 have identified greater anterior dentoalveolar height in open bite subjects compared to those with a deep bite, but only in the maxilla. The present results support these findings; the long-face group showed a greater maxillary anterior dentoalveolar height and length than the short-face group, but the level of significance did not reach the level of p < 0.05.

† Refers to one-way analysis of variance, n = number of subjects,

Based on this study, the ANB angle was the most pronounced parameter to be correlated with the anterior dentoalveolar dimensions, followed by FMA angle. The ANB angle was found to be positively correlated with the anterior dentoalveolar dimensions in the short-face group, while showing a negative correlation in the long-face group.

The ANB angle in the short-face group was found to be significantly and positively correlated with the mandibular anterior dentoalveolar length (MdAL: r = 0.39; p < 0.05), as well as with the anterior mandibular dentoalveolar height (MdAH: r = 0.41; p < 0.05). Beckmann et al.7 reported that a large ANB angle is associated with a small mandibular alveolar index—a finding that would support this current result. This suggests that the MdAL and height increase as the sagittal jaw relationship deteriorates towards mandibular retrognathism.

With regard to the average-face group, the maxillary anteroposterior position (SNA angle) was significantly and negatively correlated with the symphysis depth (SD: r = −0.41; p < 0.05). Contrasting findings were reported by Nanda,18 who investigated the influence of the sagittal relations on the SD and height in cases with different skeletal jaw relationships. He stated that the sagittal relationship was not linked to the shape of the symphysis. Furthermore, the average-face group showed a significant and negative correlation between the Frankfort-mandibular plane angle (FMA angle) and mandibular anterior dentoalveolar width (MdAW: r = −0.57; p < 0.01). This indicates that the mandible becomes more retrusive or protrusive as FMA decreases or increases in compensatory changes related to variations in vertical relation of the jaws. This could be a reflection of the clockwise and counterclockwise rotation of the mandibular plane and is in agreement with a previous report.19–21 Additionally, the Frankfort-mandibular plane angle (FMA angle) was negatively correlated with maxillary width and height ratio (MxAW/MxAH: r = −61; p < 0.01), meaning that the maxilla tries to recompensate for the downward and backward mandibular rotation.