Source of support: None

Neurofibromatosis type I (NFI), also called Von Recklinghausen’s disease, is a rare genetic disorder characterized by the development of multiple benign tumors of nerves and the skin (neurofibromas) and areas of abnormally decreased or increased coloration (hypo- or hyperpigmentation) of the skin. Areas of abnormal pigmentation typically include pale tan or light brown discolorations (café au lait spots) on the skin of the trunk and other regions as well as freckling, particularly under the arms (axillary) and in the groin (inguinal) area. Such abnormalities of skin pigmentation are often evident by 1 year of age and tend to increase in size and number over time. At birth or early childhood, affected individuals may have relatively large benign tumors that consist of bundles of nerves (plexiform neurofibromas). Individuals with NFI may also develop benign tumor-like nodules of the colored regions of the eyes (Lisch nodules) or tumors of the optic nerves (second cranial nerves), which transmit nerve impulses from the innermost, nerve-rich membrane of the eyes (retina) to the brain. We present a case of a 33-year-old male patient who reported at the Department of Oral Medicine, Diagnosis, and Radiology with multiple cutaneous tumors since childhood, café au lait pigmentation in the axilla and back, and radiographic features such as fusiform enlargement of the mandibular canal suggestive of Von Recklinghausen’s disease type I.

The term neurofibromatosis is used for a group of genetic disorders that primarily affects the growth of neural tissues.1 First described in 1882, by the German anatomo-pathologist, Von Recklinghausen, it is an autosomal dominant disorder that affects the bone, nervous system, soft-tissue, and the skin.2 It is caused by a spectrum of mutations that affect the gene located on the 17q11.2 chromosome, known as the NFI gene.3 Only 50% of NFI patients have a positive family history of the disease. The other 50% represent spontaneous mutations.4

At least eight different clinical phenotypes of neurofibromatosis have been identified and are linked to two genetic disorders. NFI occurs in approximately 2,500–3,300 live births, regardless of the race, age, sex, or ethnic background.

The major subtypes are the following:

A 33-year-old male patient reported at the Department of Oral Medicine and Radiology with the chief complaint of pain in relation to the lower right posterior region of the jaw since 7 days (Fig. 1).

He was apparently alright 7 days back, when he noticed pain in relation to 44 and 45 regions on consuming cold liquids. The pain was intermittent in nature, localized, and relieved on the removal of the stimulus. He visited a local dentist and was prescribed medications for the pain. Pain resolved temporarily following the medication until 3 days later, when he experienced unbearable pain in relation to the same region. The second episode of pain was throbbing and continuous in nature and increased in intensity on lying down. Hence, he visited the department for treatment of the same.

On general physical examination, the patient was conscious, cooperative, and well oriented to time, place, and person with normal gait, moderately built, and his vital parameters were within normal limits. 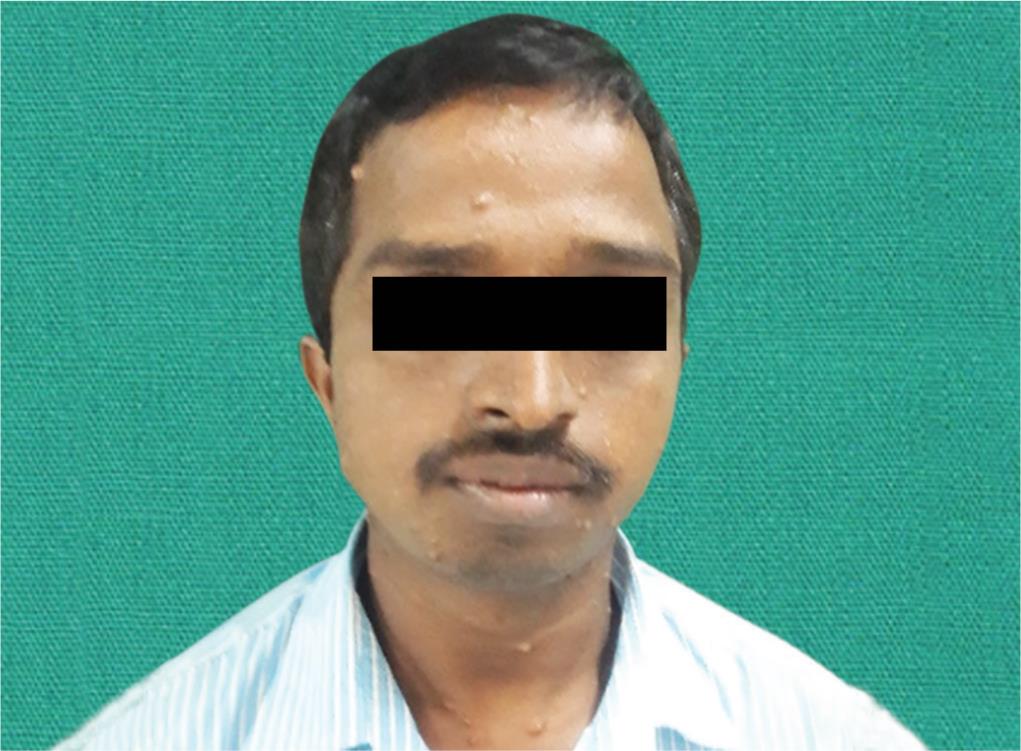 Fig. 1: Extraoral photograph of the patient showing multiple skin nodules, and multiple macules on the skin covering the head, neck, and face

Extraoral examination revealed that the face was bilaterally asymmetrical due to a prominent antegonial notch on the right side. 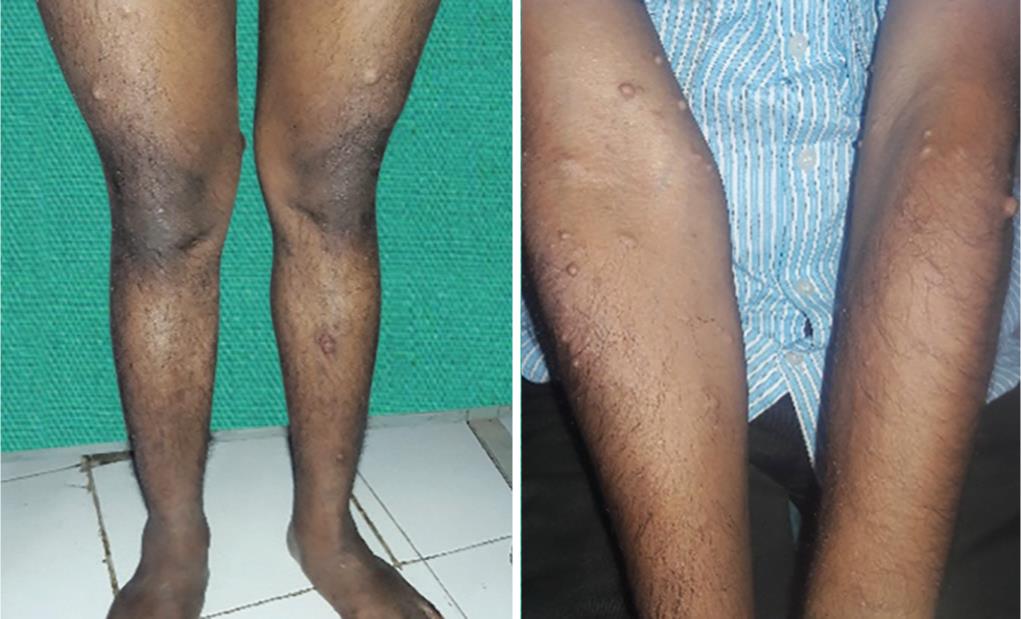 Fig. 2: Multiple skin nodules and multiple macules on the skin covering the upper and lower extremities

A single-large diffuse brownish patch measuring approximately 4 × 5 cm in size was seen on the back with an oblique pigmented line representing a surgical scar.

The lesions were present since his childhood. He also gave h/o being a slow learner in his childhood and family history revealed that his mother and elder brother had similar nodules on their body.

His past medical reported surgical debulking of multiple neurofibromas on the back and the abdomen, done 8 years back, the findings of which were consistent with neurofibromatosis (NF).

On palpation, the nodules were sessile while some were pedunculated, round to oval in the shape, firm, nontender, and varying in size from few millimeters to few centimeters. The overlying skin was normal in color with a smooth surface.

Temporomandibular joint examination showed normal mouth opening. There was a deviation of the mandible during opening and closing jaw toward the right side, clicking was present on both the right and the left side of the jaw. It was nontender, and muscles of mastication were non-tender on palpation. Lymph nodes were nonpalpable.

Soft tissue examination of the tongue revealed bilateral macular patches on the right and the left lateral surface of the tongue and also shows indentations on the tongue.

Intraoral examination showed proximal caries on the distal surface of 44 and fractured lingual cusp of 45. Pain on percussion was positive with 44 and 45. Supernumerary teeth were present lingually and distally to 45, 46, 47, and 48 and were clinically missing with no previous history of extractions.

Orthopantomogram showed severe caries with a periapical abscess in relation to 44 and 45, supernumerary teeth present distal to 45 and lingual to 44 and 45, impacted 47 was seen in the same quadrant. The right mandibular body showed an enlarged mental foramen with enlarged mandibular canal seen, there was a reduction in the vertical dimension of the mandibular body with a prominent antegonial notch. The ramus showed deepening of the sigmoid notch, fusiform enlargement 10 × 11 mm in size seen, slender condylar neck, smaller condylar head, and prominent coronoid process seen. 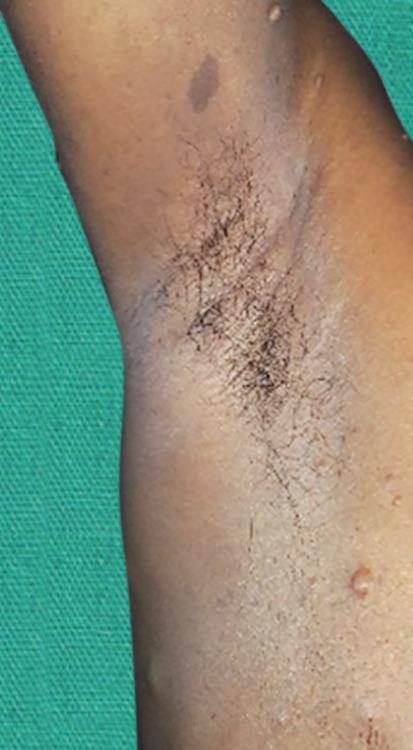 Fig. 3: Multiple skin nodules and macules on the armpits

Transcranial of the right temporomandibular joint (TMJ), open and closed mouth showed a reduction in the dimension of the mandibular body, slender condylar neck, and smaller condylar head and prominent coronoid process are seen.

Plain radiographs of the chest, spine, upper, and lower extremities revealed no abnormalities.

The paraxial section showed severe caries with a periapical abscess in relation to 45 and enlarged mental foramen (Fig. 6).

The cross-sectional view showed an enlarged mandibular canal which was extending anteriorly and exiting in the mental foramen which was also enlarged.

On the basis of history, clinical examination, and radiographic features, a final diagnosis of severe disto occlusal caries with a periapical abscess in relation to 44 and 45 was done.

On the basis of history, clinical examination of multiple nodules and macules present all over the body since birth, positive family history of similar nodules, radiographic findings of enlarged mental foramen and enlarged mandibular canal, fusiform enlargement in the ramus region reduction in the dimension of mandibular body with prominent antegonial notch, slender condylar neck and smaller condylar head, deepening of sigmoid notch and prominent coronoid process on the right side of mandible and biopsy was done; and the histopathological features were consistent with neurofibroma; in a 33-year-old male patient, a final diagnosis of NFI/Von Recklinghausen disease was done (Figs 7 to 9). 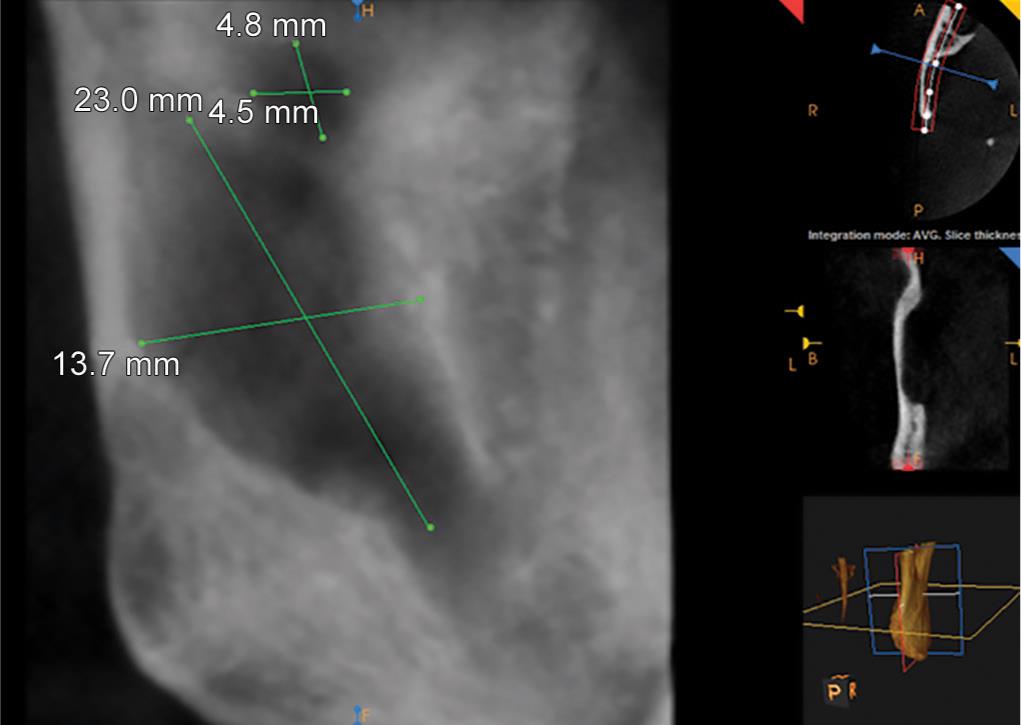 Fig. 5: Crop image of CBCT on the right ramus region 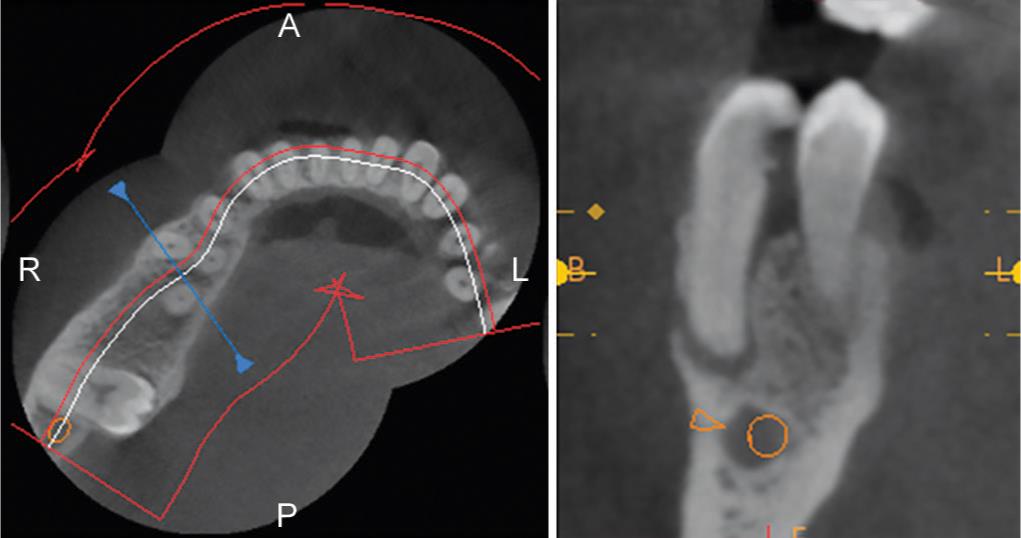 Endodontic treatment under an antibiotic coverage was done for 44 and 45.

The term NF designates a group of neurocutaneous genetic disorders that primarily affect the cell growth of the neural tissues. It was first described by the pathologists, Von Recklinghausen and Friedrich Daniel in 1882. Eight different forms of NF are recognized, among them NFI and NFII are the most prevalent.

NFI is inherited as an autosomal dominant trait. The name “neurofibromatosis” is sometimes used generally to describe NFI as well as a second, distinct form of NF known as the NFII, primarily characterized by benign tumors of both acoustic nerves, leading to progressive hearing loss. The auditory nerves (eight cranial nerves) transmit nerve impulses from the inner ear to the brain. Schwannomatosis has recently been identified as a third and rarer type of NF, but little is known about it.

NFI in addition to skin pigmentation and multiple skin neurofibromas may also show unusual largeness of the head (macrocephaly) and relatively short stature. Additional abnormalities may also be present such as episodes of uncontrolled electrical activity in the brain (seizures); learning disabilities; speech difficulties; abnormally increased activity (hyperactivity); and skeletal malformations, including progressive curvature of the spine (scoliosis), bowing of the lower legs, and improper development of certain bones. 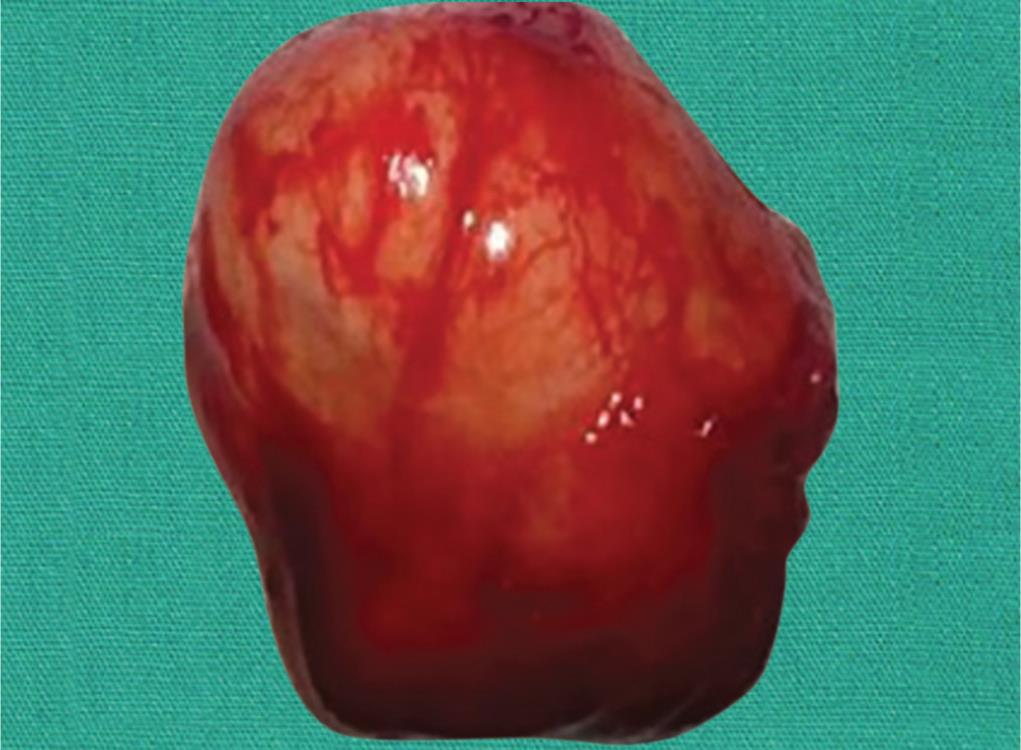 Fig. 7: Tissue specimen of plexiform neurofibroma of the back of the chest

Most people with NFI have normal intelligence but learning disabilities appear in about 50% of children with NFI.

The National Institute of Health Consensus Development Conference has suggested clinical criteria diagnostic of NFI and NFII. The diagnosis is made if an individual presents with 2 or more of the following features: 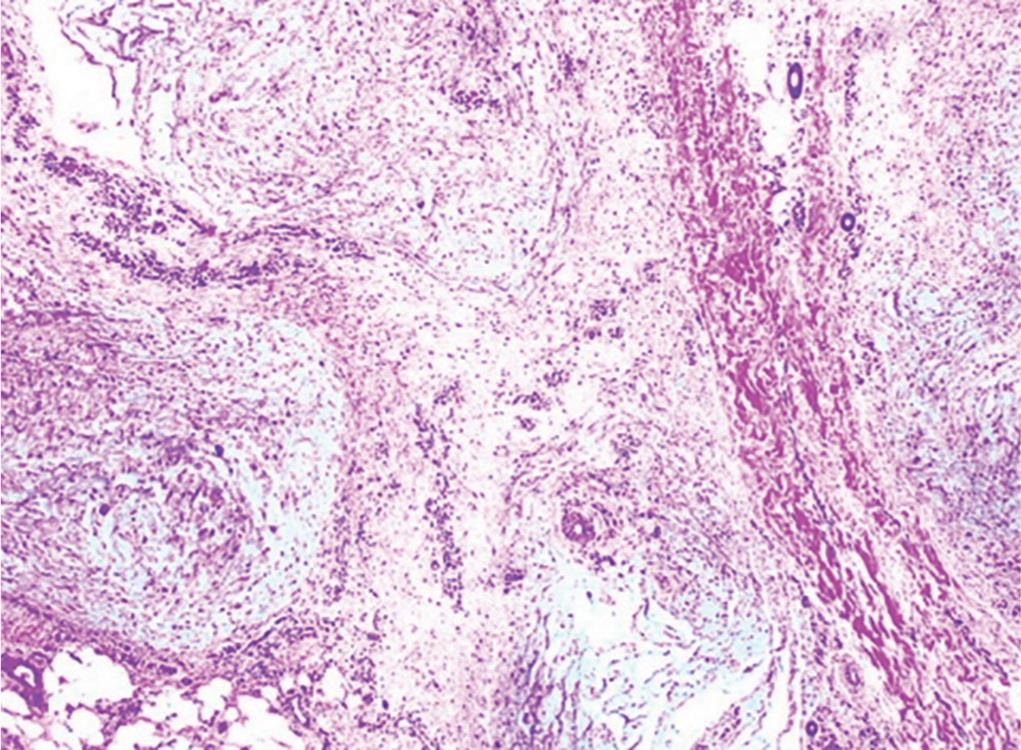 Fig. 8: Photomicrograph of tissue specimen of plexiform neurofibroma of the back 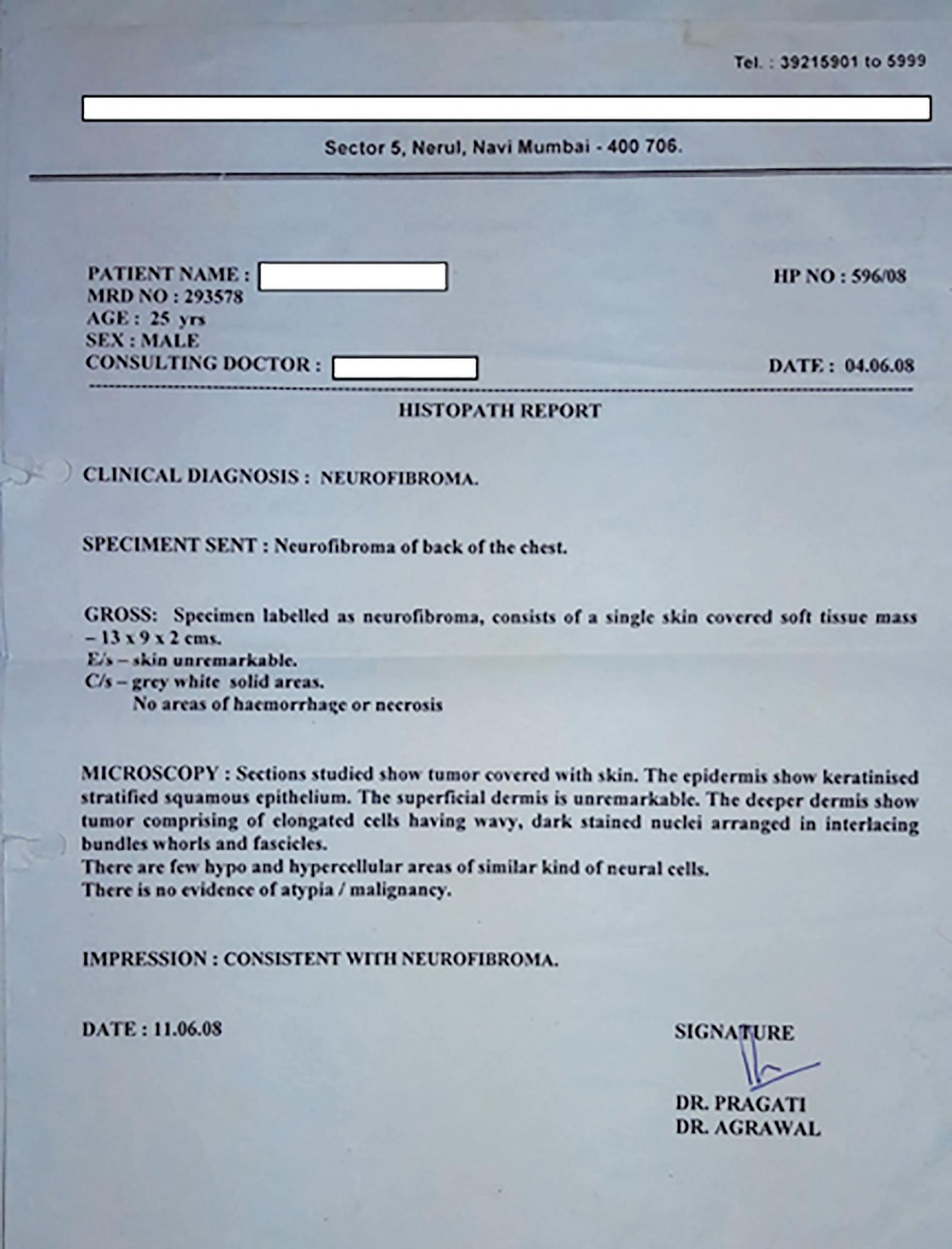 Fig. 9: Histopathological report of plexiform neurofibroma of the back

As of 2016, the criteria for the diagnosis of NFII is the Baser criteria which is a revision of the Manchester Criteria. The Baser criteria says an individual has NFII if one of the following applies:

Treatment is done primarily for esthetic reasons. It involves a multidisciplinary approach. The partial or total surgical removal of tumors can be performed to solve aesthetic and functional problems, but it is preferable to wait for the end of growth to reduce the risk of reoccurrence. Patients with NFI should be advised of the risk of recurrence and hypertrophic scarring after surgical excision. For removal of neurofibromas occurring on the head and the neck, a plastic surgery consult is advised. Carbon-dioxide laser therapy may be helpful for the removal of small lesions.

According to the criteria given by The National Institute of Health Consensus Development Conference, our case satisfied the following clinical and radiographic criteria: