Source of support: None

Purpose: Patient satisfaction is currently the decisive factor regarding the overall success of prosthodontic treatment in complete denture wearers. The aim of the study is to assess the effects of factors as age, gender, and mental attitude of a patient on the denture satisfaction.

Materials and methods: A total of 200 patients who attended the outpatient department during a span of 2 years, for the fabrication of new complete dentures, were selected for the study. The dentures were fabricated by a single clinician, using a standardized technique for fabrication of conventional maxillary and mandibular complete denture. To rate the satisfaction after the therapy, Oral Health Impact Profile (OHIP)-EDENT (for edentulous) covering seven subscales or domains was used. The outcomes from the survey were correlated with participant gender, age, and mental attitude.

Results: A total of 200 participants were recruited for the study, of which 83 were males and 117 females. The males with low OHIP scores showed significantly higher satisfaction level with their dentures as compared to females. The level of satisfaction was significantly higher in the oldest age group when compared to their youngest counterparts. Based on the mental attitude, philosophical patients were the most satisfied with their dentures among the four categories.

Conclusion: Within limitations, it could be said that factors like gender, age, and mental attitude of the patient do have an influence on overall satisfaction with complete denture eventually affecting the prognosis of the treatment rendered.

Over the years, the rate of edentulism has gone down considerably.1 However, due to ageing of the society, it is estimated that the number of edentulous patients will not decrease. Thus, the need for complete denture treatment is likely to remain substantial.2 Despite the development of dental implant therapy over the last few decades, the main treatment option involves conventional complete denture which is esthetically acceptable and has a lower cost than other treatments.3

Patient satisfaction is currently the decisive factor regarding the overall success of prosthodontic treatment in complete denture wearers.4 The fact that a denture of poor quality may be well tolerated by one person while a well-made one may result in a failure has been a frequent source of confusion and frustration.5 Several studies documented in the literature report that various factors such as general health, age, gender, personality traits, and patient’s experience have an influence on patient’s satisfaction with complete denture.6–10 Investigations on the influence of living status on denture satisfaction are rare. However, living status reflects patient’s social supporting systems and may affect denture satisfaction.11 Carlsson suggested that psychological factors are crucial in the complete denture acceptance but the relative importance of personality type on denture satisfaction is unclear.12

In the field of oral rehabilitation, one of the most widely used evaluation tools for measurements of oral health-related quality of life (OHRQoL) is the OHIP.13 Stober et al.14 noted a significant association between general satisfaction and OHRQoL in patients receiving complete dentures. OHIP is a questionnaire on OHRQoL that comprises 49 items.15 The OHIP-EDENT is the shortened version of the OHIP, which comprises 19 items specific to edentulous patients.16 OHIP-EDENT measures the OHRQoL changes in denture wearers, before and after receiving a new prosthesis.17 A very few studies have been reported with significant conclusions examining various factors and its association with denture satisfaction.

Thus, the aim of the study is to assess the effects of factors such as age, gender, and mental attitude of a patient on the denture satisfaction.

This study involved 200 completely edentulous patients,18 who had volunteered to receive new complete dentures at the Post Graduate Institute of Dental Sciences, Rohtak, India, over a period of 2 years that were assessed for possible inclusion in the present study. Briefly, the selection of individuals was based on the following criteria:

The patients who met the eligibility criteria mentioned above participated in the study and consent was obtained from them. A routine case history was recorded and complete oral health examination was done. The participants were assessed for mental attitude using structured questionnaire17,20 and were grouped based on the House classification.21,22

Participants were categorized for data processing as follows:

The dentures were fabricated by a single clinician, using a standardized technique for fabrication of conventional maxillary and mandibular complete denture. The technique involved primary and secondary impressions made with DPI Pinnacle impression compound (DPI, Mumbai, India) and Neogenate impression paste (Septodont, Saint-Maur-des-Fossés, France), respectively. The denture bases with occlusal rims were mounted in centric relation at a predetermined occlusal vertical dimension on mean value articulators. The dentures were tried in and then inserted followed by denture adjustment. The clinician who fabricated was blinded regarding dentures while evaluating for patient’s satisfaction. To rate the satisfaction after the therapy, OHIP-EDENT covering seven subscales or domains was used (Table 1).23

The questionnaire was applied by one clinician. To make it easier for the patient, a choice of only three answers was given: (0) never; (1) sometimes; (2) almost always.24 The lowest score represents higher satisfaction and better QoL after wearing a complete denture. Subjects were evaluated through the questionnaire after 7 days, 1 month, and 3 months of postinsertion visit. Recalls of the patients were done through phone calls and recall letters were also posted to the participants. As no invasive intervention was a part of the research, an ethical approval was not sought for this study.

The data collected were statistically analyzed. All values were reported as mean ± standard deviation. For an intergroup comparison, an unpaired Student t test was utilized, while analysis of variance ANOVA followed by Tukey honestly significant difference (HSD) post hoc test used for multigroup comparisons. For all analyses, the level of significance was set at p %3C; 0.05. All analyses were performed using SPSS (Version 22.0, SPSS Inc.; IBM Corporation, Chicago, IL, USA).

A total of 200 participants were recruited for the study, of which 83 were males and 117 females. Per the House classification, a majority of them (126 participants) belonged to the philosophical group. The exacting and indifferent groups had 48 and 22 participants, respectively. Only four participants were found to have a hysterical mindset. The overall denture satisfaction of the participants had an OHIP score of 15.77 ± 3.15 for males and 19.55 ± 4.33 for females. The males with low OHIP scores showed a significantly higher satisfaction level with their dentures as compared with females (Table 2 and Fig. 1).

Table 3 and Figure 2 show the age groups into which the participants were categorized. Among these, the youngest age group of 45–54 years appeared to show the least satisfaction with dentures in all aspects (OHIP score of 19.56 ± 4.91), especially, on their first follow-up visit. The difference between the OHIP scores was not statistically significant when compared to the middle age group. Interestingly, the level of satisfaction was significantly higher in the oldest age group (16.76 ± 3.25) when compared with their youngest counterparts. 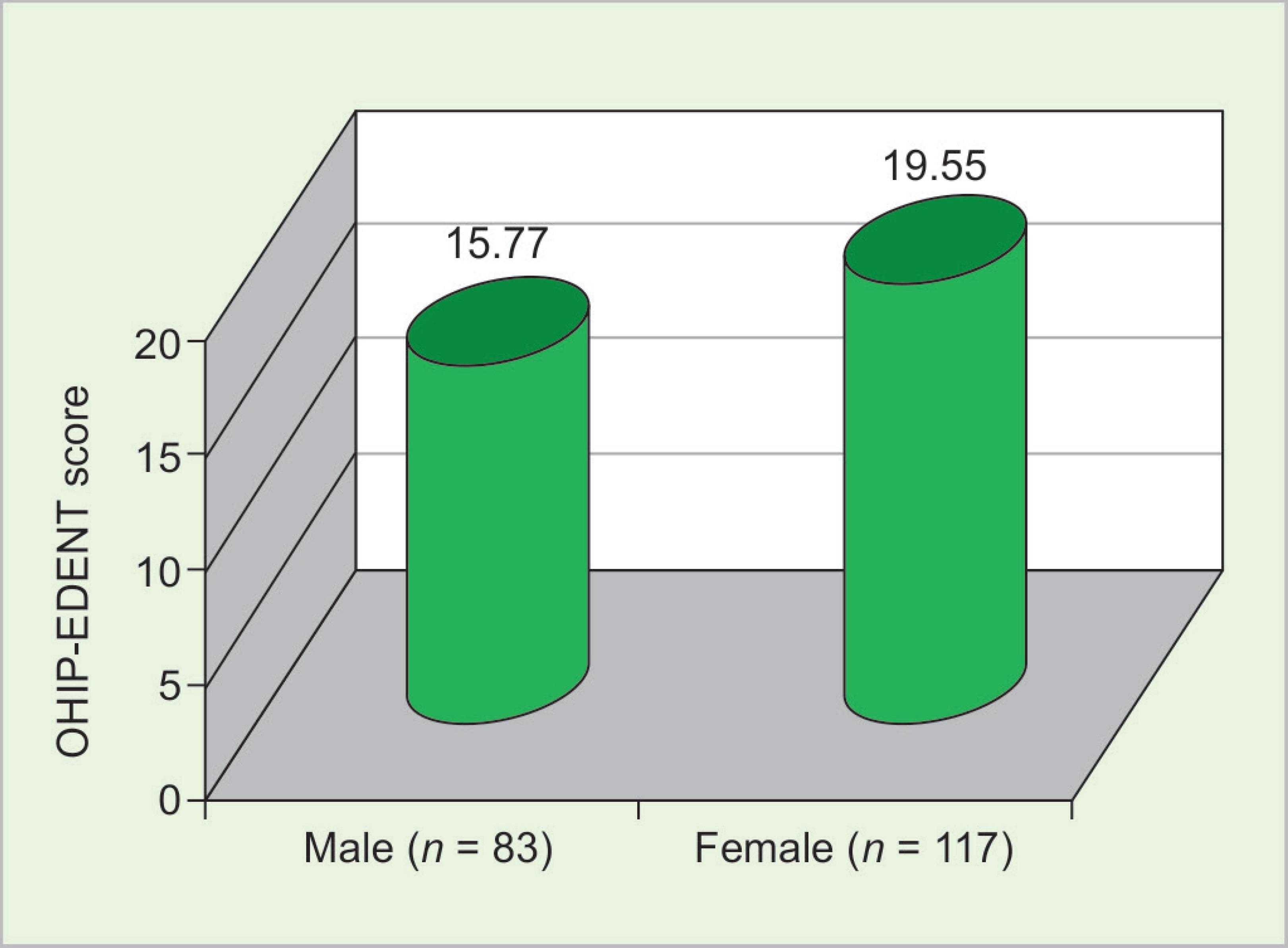 Fig. 1: Correlation of gender with the OHIP-EDENT score at PI-I

Based on the mental attitude, philosophical patients had the lowest OHIP-EDENT score of 15.67 ± 2.02, being the most satisfied among the four categories (Table 4 and Fig. 3). But, it was not significantly different from the indifferent group who showed a comparable score of 16 ± 0.75. The results also revealed that philosophical and indifferent patients were found to be more statistically satisfied with their complete denture than exacting and hysterical patients. The hysterical group was the least satisfied with an OHIP-EDENT score of 23.25 ± 2.21.

When looking at the time elapsed after denture insertion, the OHIP-EDENT score significantly reduced from the first postinsertion (PI) visit held at 7 days, and, subsequently, at the second and the third visit held after 1 month and 3 months, respectively (Table 5 and Fig. 4).

The aim of this study is to find any relationship, if exists, between the patient’s complete denture satisfaction with age, gender, and mental attitude. The sample number was decided based on previous studies.18 First, a questionnaire20 was completed to judge the mental attitude of the patient with routine history and clinical examination. All the subjects were then evaluated for the complete denture satisfaction level with the help of another questionnaire (OHIP-EDENT) which was filled during the 7th day, 1-month, and 3-month postinsertion visit. 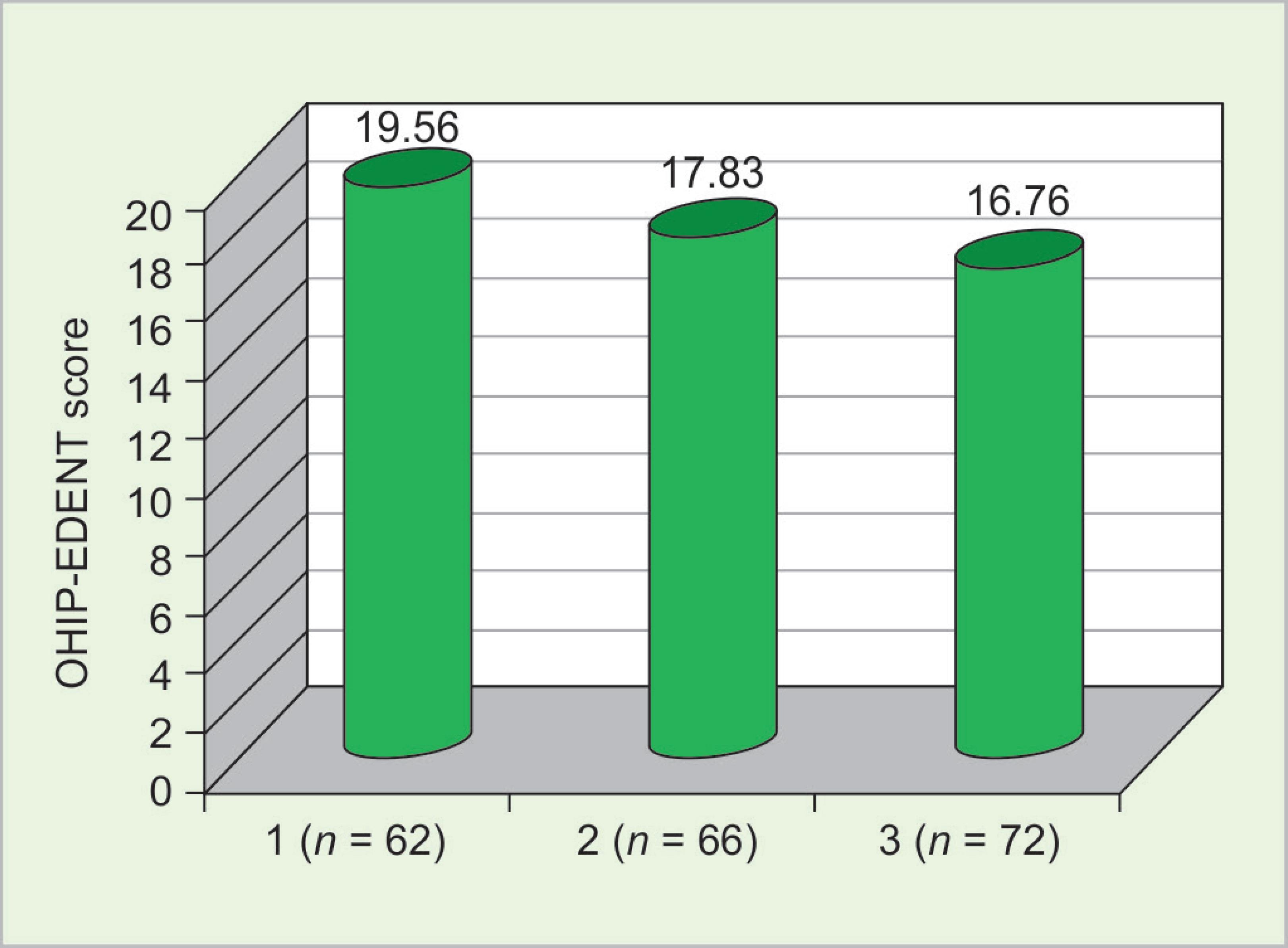 Fig. 2: Correlation of age with the OHIP-EDENT score at PI-I

The oldest age group in our study proved to be the most satisfied group among all. The results are in line with the findings of Weinstein et al.29 who observed that the age group of 70 and older was the most satisfied among all the age groups. This finding may be correlated that the older population have an overwhelming desire for satisfaction at all level of function in their daily life. Another reason may be that they feel hesitant in reporting to the clinician repeatedly and try to adjust with the minor problems.30 Mantecchini et al.31 in their study of stereognosis in edentulous subjects found that stereognostic ability is poor in older subjects than younger ones. The subjects having poorer stereognostic ability showed more satisfaction than those having the better stereognostic ability.

The results of the present study revealed that patients with philosophical and indifferent mental attitude were found to be more satisfied as compared to those with an exacting or hysterical mindset. Any individual who is frequently depressed, overtly emotional, excessively worrying, having greater tendency to complain about his/her denture has been found to have a high neuroticism score which was quoted by Nairn and Brunello.32 Fouda et al.33 reported a significant relationship between high neuroticism scores and patient dissatisfaction. Nairn et al.32 using the Cornell Medical Index (CMI) found that patients who scored higher for neuroticism were more difficult to satisfy and had more complains. Ozdemir34 reached to the conclusion that significantly low satisfaction scores were found with the group of patients with stress-sensitive characteristics in their personalities, once again supporting the results of this study. Patient’s satisfaction has been recorded by different authors at the time of insertion35 of dentures or after varying periods of use.36,37 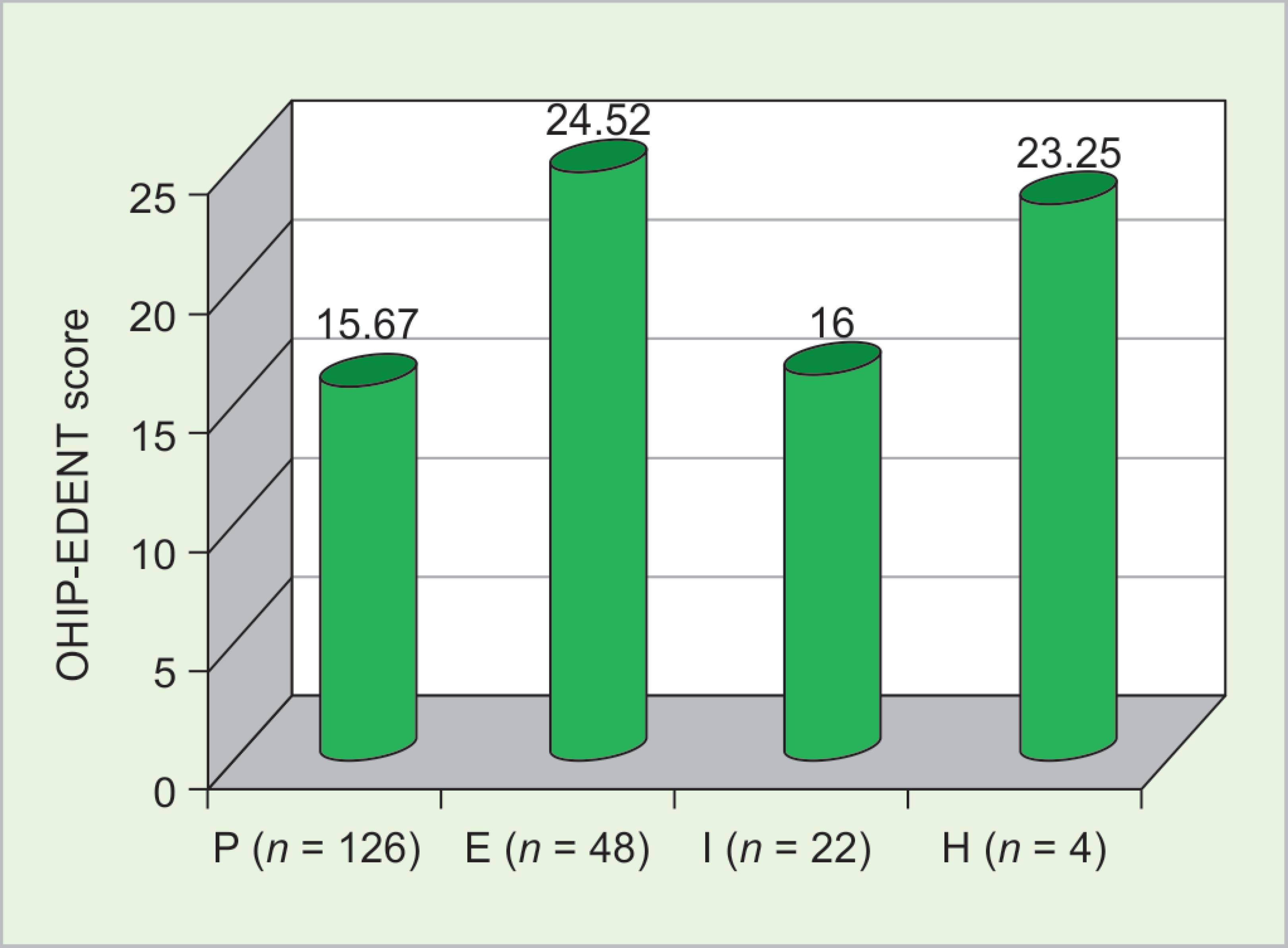 Fig. 3: Correlation of mental attitude with the OHIP-EDENT score at PI-I

* By using multigroup comparisons (analysis of variance—ANOVA), results are also found to be highly significant (p < 0.001) 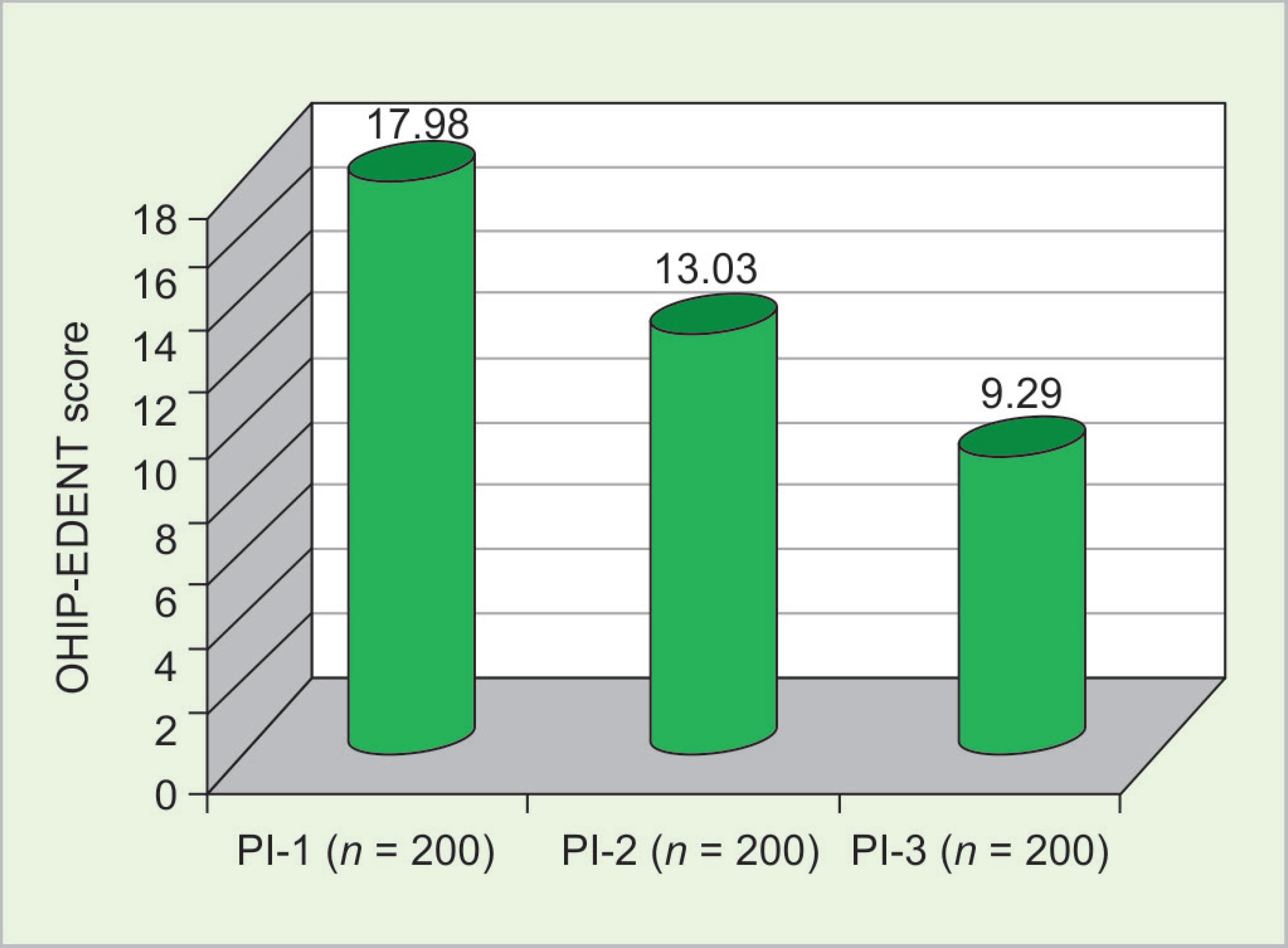 Fig. 4: Correlation of postinsertion visit with the OHIP-EDENT score

To conclude, males were found to be more satisfied with their dentures as compared to females. The youngest age group of 45–54 years showed the least satisfaction with dentures, while the oldest group was the most satisfied one. Based on the mental attitude, philosophical patients were the most satisfied with their dentures among the four categories. Within limitations, it could be said that factors like gender, age, and mental attitude of the patient do have an influence on overall satisfaction with complete denture eventually affecting the prognosis of the treatment rendered. This study encourages further studies with a larger sample size, with longer follow-up evaluation in different regions.